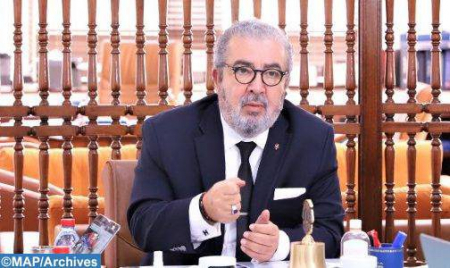 The confused and ending military dictatorship is the number one responsible for Algeria’s multi-faceted crisis, says the columnist of BAB, MAP’s monthly magazine. “The decay of power in Algeria, the weakening of the state, the enslavement of the political class, police control and repression of civil society have finally revealed to the world that the confused and ending military dictatorship is the number one responsible for the multi-faceted crisis that hits this country,” writes Khalil Hachimi Idrissi, Director General of the Moroccan News Agency (MAP), in the editorial of BAB’s latest issue. According to Hachimi Idrissi, “the ridiculous strokes of the chin and the reels with his wooden sword of President Abdelmajid Tebboune, proxy of the generals, add ridicule to an already tragic situation.” Stressing that the saga of failed Algerian generals continues to plunge the region into a dangerous crisis, the columnist said that “to make Morocco the alpha and omega of all the dramas of the country is a smoke and mirrors that serves no purpose.” “Everyone has understood that the technique of scapegoating is outdated and that any attempt to make the foreigner endorse its own failure is a maneuver doomed to failure,” he continues. The columnist writes, moreover, that the Algerian power has chosen to open a front with the EU after having sown a nameless disorder in Tunisia, Libya, Mali and the Sahel in general, while the war in Ukraine begins to seriously impact the world, in its entirety. It indicates that the strong reaction of the EU to the breach by Algiers of the treaty of friendship that binds it to Spain has given rise to a pathetic backpedaling that will surely be taught in schools of political science in the future. Hachimi Idrissi further noted that Spain’s sovereign position to support the Moroccan autonomy plan in the Sahara has also been perceived by the Algerian regime as a declaration of war against it, while it trumpets everywhere that it is not a party to the conflict. “The hypocritical neutrality displayed without much conviction by the Algerian junta has shattered.” While wondering if the proud and brave Algerian people are condemned to indefinitely endure this despoilment of its independence, this monopolization of its wealth and this endless demeaning of its dignity by impostors kleptomaniacs and voracious, Mr. Hachimi Idrissi says that the time for change will come, ineluctably, in Algeria. “Men of honor will come one day to restore things in their right and give a future to a country that has been plundered, demeaned, degraded and humiliated by thugs doomed to the dustbins of history,” concludes MAP’s director general.