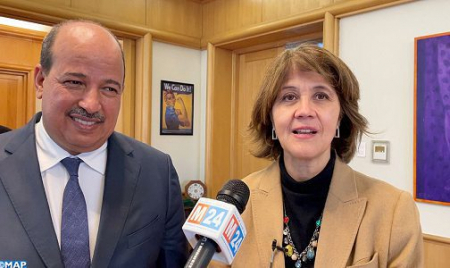 Several Chilean officials have confirmed their country’s willingness to strengthen political, economic and cultural cooperation relations with Morocco and lift them to better levels. This intention was expressed on the sidelines of a series of talks held in Santiago by the Moroccan parliamentary delegation, led by the Speaker of the House of Advisors, Naama Mayara, who is on a visit to the South American country until June 25. In a statement to M24, MAP’s 24-hour rolling news channel, the Secretary of State for Foreign Relations, Ximena Carolina Fuentes Torrijo, said her talks with Mayara and the accompanying delegation were “very fruitful” and covered many topics of common interest. She highlighted the firm commitment of her country to strengthen bilateral relations with the Kingdom, not only at the political level but also in the economic and cultural fields, noting that it has been agreed to develop these relations through concrete steps. In a similar statement, the Chilean Secretary of State for the Interior, Manuel Zacarias Monsalve, stressed the need to consolidate the good historical relations between Morocco and Chile by laying the foundations of a partnership that encompasses the fields of migration and security, to fight against cross-border crime as well as drug and human trafficking. The visit of the Moroccan delegation to Santiago was also an opportunity to meet with the President of the Constitutional Court, Cristian Letelier Aguilar, who praised the significance of this visit which allows an exchange of experiences and expertise and the strengthening of cooperation ties on issues of common interest. The exchange of visits between Moroccan and Chilean delegations will undoubtedly contribute to consolidating these ties, he noted, adding that he was convinced that these relations will continue to be close and durable.