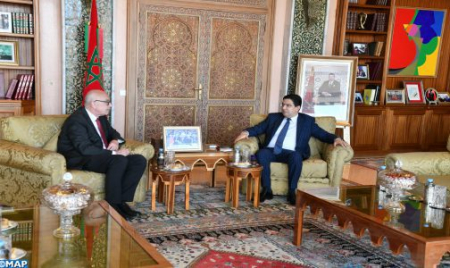 Minister of Foreign Affairs, African Cooperation and Moroccans abroad, Nasser Bourita, on Friday, described as “strong and fruitful” the cooperation between the Kingdom of Morocco and the United Nations Counter-Terrorism Office (UNOCT). This cooperation is not limited to the theoretical aspect, but also includes the practical aspect through the implementation of several procedures and joint projects that have proven their effectiveness and given tangible results, said Bourita, who chaired along with the Under-Secretary-General of the UNOCT, Vladimir Voronkov, the ceremony commemorating the first anniversary of the opening in Rabat of the United Nations Office for Counter-Terrorism and Training in Africa. On this occasion, Morocco’s top diplomat called for the promotion of this cooperation in the years to come. The United Nations Office for Counter-Terrorism and Training in Africa, which was inaugurated on June 24, 2021, in Rabat is the first of its kind in the African continent. It is one of the fruits of this partnership, said Bourita. During its first year, the UN Office has achieved many objectives and contributed to the training of African executives in the field of counter-terrorism, he added. In the same context, Morocco’s FM said he agreed with Mr. Voronkov to strengthen the strategic dialogue between the Kingdom and the UNOCT, which will be launched in the coming years. The high-level meeting of heads of counter-terrorism and security agencies of North African and Sahel countries (June 23-24 in Marrakech), is another proof of the partnership that unites the Kingdom of Morocco with the UNOCT, in line with the vision of His Majesty King Mohammed VI of turning Morocco into a link between African countries and its country partners and regional and international organizations. In this regard, Bourita noted that Morocco, in partnership with the United Nations, makes its expertise available to African experts, who will thus benefit from its experience in combating terrorism. Bourita added that the 1st ministerial meeting of Atlantic African States, held on June 8 in Rabat, was a space for tripartite cooperation between Morocco, the UNOCT and the African States, in the field of counter-terrorism. Mr. Bourita and Mr. Voronkov had signed, in October 2020, a Headquarters Agreement for the establishment in Morocco of the Program Office for Counter-Terrorism and Training in Africa of the UNOCT (United Nations Office of Counter-Terrorism). The Program Office works to develop and implement accredited programs aimed primarily at capacity building and skills development in the area of counter-terrorism, including security, investigation and prosecution, prison and border management, disengagement, as well as rehabilitation and reintegration. It relies on the pooling of expertise between Morocco and the UNOCT to provide quality training to African states, in a collaborative and supportive approach reflecting a spirit of collective responsibility. The choice of Morocco as a partner for the establishment of this Program Office is further evidence of the trust and esteem vested in the National Strategy to Combat Terrorism and Violent Extremism under the enlightened leadership of HM King Mohammed VI.