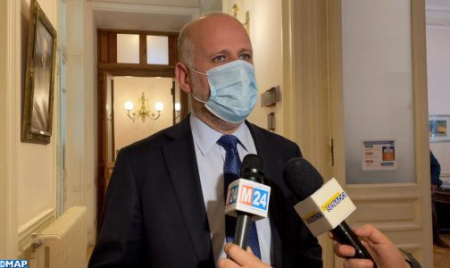 Morocco’s distinguished location in the Maghreb, the Arab world and in Africa makes the Kingdom a priority in Chile’s foreign policy, said the speaker of the Chilean Senate, Mr. Álvaro Elizalde Soto. Chile and Morocco enjoy genuine friendly relations which have been strengthened over the years, added Mr. Soto, who was speaking following talks held Thursday with the Speaker of the House of Advisors, Mr. Enaam Mayara, who is leading a large parliamentary delegation on a visit to this country. In a statement to the Moroccan news channel M24, Mr. Soto explained that for Chile, “it is important to strengthen relations and ties of friendship with Morocco”, stressing the importance of exchanging visits, consolidating commercial and political ties and creating mechanisms that can contribute to the prosperity of our two countries”. For his part, Mr. Mayara noted that the visit of the Moroccan parliamentary delegation to Chile reflects the depth of relations between the two countries and shows the firm will to continue to strengthen relations between the Moroccan and Chilean parliaments. In this regard, he said he proposed to organize an annual economic parliamentary forum between Chile and Morocco, with the aim of exploring prospects for trade and investment. The Moroccan official stressed that this forum would be an opportunity to highlight Morocco’s potential in various fields, such as renewable energies, water and agricultural policy, adding that the project of this forum is part of South-South cooperation, an approach promoted by Morocco under the enlightened leadership of HM King Mohammed VI. The Moroccan delegation also had a meeting with the Speaker of the Chilean House of Representatives, Raul Mardones, in the presence of the ambassador of Morocco to Chile, Mrs. Kenza El Ghali, a meeting which was an opportunity to highlight the distinguished level of relations between the two countries, since the historic visit of the Sovereign to Chile in 2004, opening the way to promising prospects and fruitful cooperation at all levels. In this regard, the speaker of the House of Representatives of Chile underlined his country’s commitment to promoting excellent relations with the Kingdom at the legislative, political, cultural, social, commercial and economic levels, adding that it was agreed to work together to achieve these objectives and to translate them into action, according to a roadmap and a specific timetable. He also welcomed the proposal of the Speaker of the House of Advisors to create a Moroccan-Chilean Parliamentary Economic Forum, which will be a space to attract investments and strengthen economic and commercial ties between the two countries.