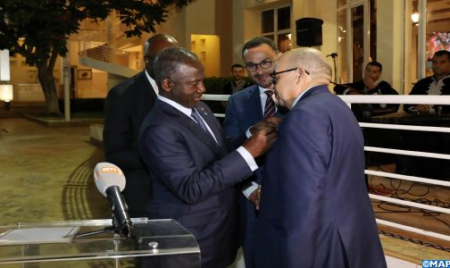 The Secretary-General of the House of Representatives, Najib El Khadi, was made an officer of the “Order of Francophonie and Dialogue of Cultures,” on Thursday on the sidelines of the 28th African Regional Assembly of the Parliamentary Assembly of La Francophonie (APF) that took place on June 23-24 in Rabat. El Khadi was decorated by the President of the APF and Speaker of the National Assembly of Côte d’Ivoire, Adama Bictogo, in the presence of Rachid Talbi Alami, Speaker of the House of Representatives and other members attending the session, said a statement from the Lower House. This honor comes “in recognition of his work in the APF as Vice-President of the Association of Secretaries General of Francophone Parliaments,” the same source added. This order with international vocation is to acknowledge the outstanding merits of personalities who have distinguished themselves by serving the ideals of the Assembly and the Francophonie, the statement said. Many figures from around the world have already been decorated with this order, including politicians, writers, intellectuals, scientists and figures from the world of art and sport. The Order “Francophonie and Dialogue of Civilizations” was created in New York in 1976 during the seventh ordinary session held by the APF at the United Nations. The distinction is the only order of the Francophonie and a prestigious international insignia awarded by an inter-parliamentary organization.