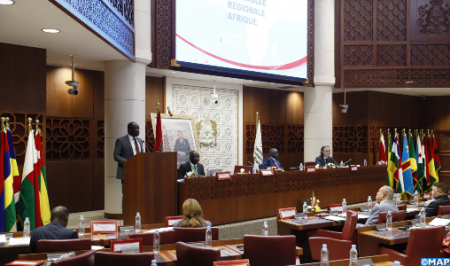 The African Regional Assembly of the Parliamentary Assembly of La Francophonie (APF) approved, on Friday, a recommendation submitted by the Moroccan parliamentary delegation, in which it expresses its concern over the terrorists and separatists threats in Africa, reaffirming its firm commitment to the territorial integrity of the countries of the region and the security of their peoples. A statement issued by the House of Representatives underlines that the 28th session of the African Regional Assembly, which was held on June 23 and 24 in Rabat, paid tribute to HM King Mohammed VI and welcomed the good organization of this session, hosted by the Moroccan Parliament. Speaking on this occasion, the Speaker of the House of Representatives, Rachid Talbi Alami, said he was very satisfied with the smooth running of this session, which addressed important topics such as democracy, the African Continental Free Trade Area, the participation of women in political, economic and social life, the active mobilization of MPs in terms of environmental protection and the fight against climate change, as well as the political, social and health situation in the French-speaking region of Africa. Mr. Alami, who is also the deputy-president of the Parliamentary Assembly of La Francophonie, stressed the common destiny of the French-speaking region of Africa, a destiny which requires “the consolidation of the principles of democracy to ensure peace and stability, establish a better status for African women, a clean and sustainable environment as well as adequate health conditions and a prosperous, united and flexible African economy within the framework of the African Continental Free Trade Area”. The Speaker of the Lower House called for unifying voices in the world of tomorrow, in harmony with the challenges of the African continent and in the light of the convening of the next session of the Parliamentary Assembly of La Francophonie in Kigali this year, noting that Africa “will remain an essential pillar in the construction of the French-speaking world”. Created in May 1967 in Luxembourg, the Parliamentary Assembly of La Francophonie is a forum for dialogue, proposals, exchange of information and experiences bringing together several parliamentary sections on the five continents. The Moroccan Parliament joined the APF in 1979 and hosted some regional African assemblies (19th in 2011, 25th in 2017 and 27th in 2019).