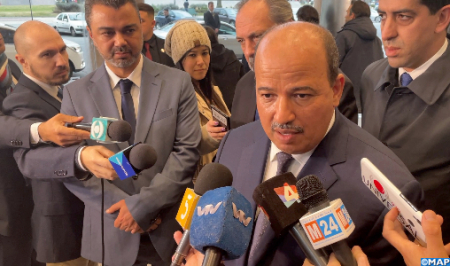 The strengthening of cooperation relations between Morocco and Uruguay and the potential for their expansion to the economic and trade sectors were the focus of talks between speaker of the House of Advisors, Enaam Mayara, with several officials of this South American country, as part of a working visit he is making in Uruguay leading a large parliamentary delegation. The Uruguayan officials were unanimous in stressing the importance of the visit of the Moroccan parliamentary delegation in Montevideo (26-29 June) which will undoubtedly give a new impetus to bilateral relations between Morocco and Uruguay and explore the great opportunities to seize for their strengthening in the future. In a statement to the Moroccan news channel M24 at the end of his meeting with the parliamentary delegation, the Uruguayan Minister of Foreign Affairs, Francisco Bustillo, welcomed the opportunity opened by this visit to discuss many issues of common interest affecting various sectors. In the opinion of the Uruguayan official, there are promising prospects for bilateral relations, which are “historic ties” that both countries are called upon to deepen at the economic and commercial levels. The acting Minister of Livestock, Agriculture and Fisheries, Juan Ignacio Buffa, said in a similar statement to M24, that both countries are called upon to seize the “tremendous opportunities for integration between them and deepen trade ties that, today, are not yet up to expectations.” The Uruguayan official stressed the existence of a common desire to consolidate these relations in their commercial component, saying that his country considers Morocco as a gateway to African markets, which Uruguay attaches great importance. The visit of the Moroccan delegation has helped define a set of objectives, including the development of a “concrete roadmap with Morocco, a friendly country, which is able to strengthen relations as soon as possible, especially on trade,” said Buffa. The Moroccan delegation in Montevideo also met with vice-president of the Republic of Uruguay and president of the Senate, Beatriz Argimón, who told M24 that “we are very satisfied with the parliamentary cooperation links” between the two countries, describing as “excellent initiative” the upcoming creation of the Moroccan-Uruguayan friendship group, which will open new horizons in the rapprochement between the two legislative institutions. For his part, Senator Gustavo Penades said he highly appreciated the visit of the Moroccan delegation in Montevideo, noting that Uruguay is determined to extend the bridges of cooperation with Morocco and further consolidate its relations with the Kingdom. He stressed that the Kingdom, which plays an important role in its regional and continental environment, is in the eyes of Uruguay, the gateway to Mercosur (Southern Common Market) and other Latin American countries to the African continent.