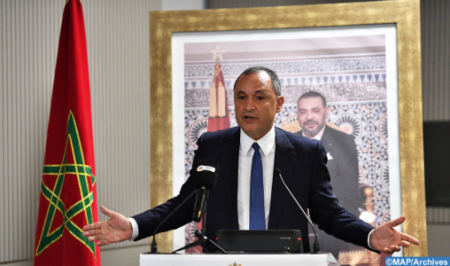 To ensure its development, Morocco has made the firm choice of action, openness and ambition, said Thursday in Brussels the minister of Industry and Trade, Ryad Mezzour. ”In Morocco, which does not have large nature reserves, the decision was taken at the highest level of the State to promote action, to build infrastructure, to work over the long term and within the framework of plans, and to ensure that each generation builds for the next one, each time with visions extending over thirty years”, underlined the minister during the opening of the 33rd extraordinary session of the Crans Montana Africa Forum, organized on the theme ”the world at the time of Africa’s economic sovereignty”. “Instead of focusing on nature reserves, we have decided to create and enhance the value of work”, he said, citing among other achievements the policies of dams, energy and infrastructure, with in particular the construction of 1,800 km of highways and the first port of the Mediterranean and Africa. Morocco, he pointed out, has opted for a strategy of openness, materialized by free trade or commercial cooperation agreements with more than 100 countries. “Rather than being afraid of change, of spending too much energy trying to stabilize very unstable situations and balances, at the risk of leaving the essential aside, we must show ambition”, said Mr. Mezzour. Morocco has not taken the path of “passivity”, reaching out to its partners to work together and bring out new economic poles, he added. During three days, this extraordinary session of the forum will discuss the construction of a new Africa-Europe partnership, security challenges, the strengthening of public health systems, the financing of public investment and the place of African women in the fight for food security. The Crans Montana Forum is a Non-Governmental International Organization established since 1986. The Founding Fathers’ philosophy has always been to build a better World, “Towards a more Humane World”. The Crans Montana Forum encourages International Cooperation and works to promote best practices to ensure a permanent dialogue between all those who handle high-level responsibilities around the World.