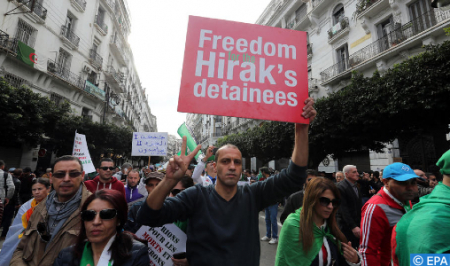 Amnesty International has called on the Algerian authorities to immediately and unconditionally release at least 266 activists and demonstrators who took part in the Hirak movement. These detainees have criticized the authorities, denounced state corruption or expressed solidarity with those in detention, Amnesty International said in a statement. The same source recalled that in May 2022, local observers reported that at least 266 activists and protesters are languishing in Algerian prisons for merely exercising their rights to freedom of expression and assembly, stressing that the Algerian authorities are called upon to “drop all charges against these individuals without delay.” “The unjustified imprisonment of activists and demonstrators must stop,” said Amnesty International’s Deputy Director for the Middle East and North Africa. “It is shameful that the Algerian authorities continue to invoke overly repressive and vaguely worded laws to prosecute people solely for peacefully exercising their rights to freedom of expression and assembly. She said that many protesters are being held in pre-trial detention for excessively long periods, while others have been sentenced to up to five years in prison on overly broad and fabricated charges such as “undermining” state security, “undermining national unity,” “insulting” a public official, “inciting unarmed assembly,” spreading false information, and terrorism.