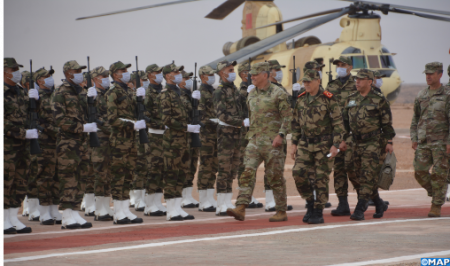 The combined Moroccan-American exercise “African Lion 2022” ended on Thursday at Cape Draa (Tantan), with a training between the Royal Armed Forces and the American Armed Forces. During this exercise, which was attended by Lieutenant General Belkhir El Farouk, Inspector General of the FAR and Commander of the South Zone, and General Stephen Townsend, Commander of the U.S. Africa Command (AFRICOM), maneuvers were conducted by F16 aircraft, in addition to bombing targets by Apache helicopters and armored vehicles, accompanied by tanks “Abrams”. The exercise also included bombing by “Abrams” tanks during the maneuvers and bombing with “HIMARS” missile launchers. “We are here to participate in the 18th edition of the African Lion 2022 exercise, which is the largest and most diverse multinational and multidisciplinary operation we have conducted in Africa, in partnership with the Royal Armed Forces since 2004,” said General Townsend in a press statement on the occasion, expressing his deep appreciation to the RAF, the Moroccan government and the South Zone Command. These maneuvers, marking the closing of this 18th edition that “I followed, alongside Lieutenant General Belkhir El Farouk, Inspector General of the FAR, Commander of the South Zone, were the result of a training that lasted three to four weeks,” he noted, while welcoming the organization of these exercises and the results of these maneuvers. The exercise “African Lion” has three main objectives: to perfect the skills of all participating units, improve interoperability and strengthen the ability to work and cooperate now and in the future, noted General Townsend before concluding by stressing that these maneuvers have strengthened the partnership between Morocco and the United States as well as the participating countries. For his part, Colonel Major Abdelhaq Mhasni, Deputy Chief of the Third Staff Office / South Zone, said in a similar statement that the 18th edition of the exercise “African Lion” was marked by the achievement of all the objectives of military training in the various areas of planning and multinational implementation of operations, logistical support, interoperability, humanitarian assistance, material support and integration of new partners. “Our follow-up to these closing exercises demonstrates the importance of the strategic partnership between Morocco and the United States of America, desired by His Majesty King Mohammed VI, Supreme Leader and Chief of Staff of the FAR,” said Colonel Major Mhasni. Organized by the Royal Armed Forces and the U.S. Armed Forces, in accordance with the High Instructions of His Majesty King Mohammed VI, Supreme Leader and Chief of General Staff of the RAF, African Lion aims to perfect the intervention capabilities of participating units and strengthen their combined action capabilities in planning and implementing military operations in the framework of a coalition. This year’s edition (June 20-30) saw the participation of 10 countries, including Morocco and the United States, as well as some twenty military observers from partner countries in the regions of Agadir, Benguerir, Kenitra, Mahbes, Taroudant and Tantan.