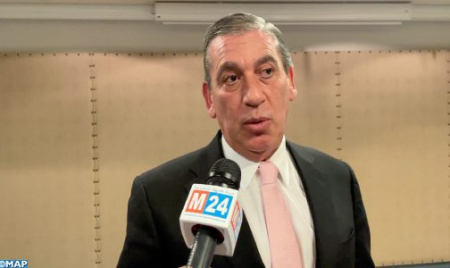 The Mercosur Parliament (Parlasur) “highly appreciates the efforts made by HM King Mohammed VI to achieve a greater rapprochement” between Africa and the Arab world on the one hand, and Latin America on the other, within the framework of the South-South cooperation that the Kingdom sets up as a fundamental principle of its foreign policy. The president of Parlasur, Tomas Bittar Navarro, welcomed in a statement to the Moroccan news channel M24, “the generous initiatives to achieve integration between these two regions” undertaken by Morocco. Tomas Bittar, who met in Montevideo with speaker of the House of Advisors, Enaam Mayara, on the sidelines of a symposium on climate change and the role of parliaments in Latin America and the Caribbean, organized by the Inter-Parliamentary Union and the Uruguayan Parliament, stressed that in a globalized world “no country can live on an isolated island, and it would be unreasonable for us to miss the opportunity to achieve this integration” with Africa and the Arab World. The president of Parlasur also described as “excellent” the discussions with the speaker of the House of Advisors, adding that “the time had come for the Moroccan upper house to become a member of Parlasur”. He stressed in this regard that there is a political will for the House of Advisors to join the Mercosur Parliament, which is now the second largest bloc in the world, noting that an agreement in this sense should be reached within a period not exceeding one and a half months, which will allow the implementation of a roadmap for the consolidation of cooperation in many areas of common interest. For his part, Mayara expressed the desire of the House of Advisors to join Parlasur as an observer member. Noting the diverse composition of the House of Advisors related to the economic and professional variant, Mayara recalled that the headquarters of the Permanent Secretariat of the Parliamentary Forum of African, Latin American and Caribbean countries (Afrolac) is located in Rabat, which gives the House of Advisors the role of impetus of relations with this regional parliamentary bloc, especially since Morocco is an observer member in all regional parliamentary forums of Latin America. The speaker of the upper house stressed in this regard “the valuable participation” of Parlasur in the activities of the Forum held last March in Rabat between the Senates and similar councils in Africa and the Arab world and their counterparts in Latin America and the Caribbean, a forum that has enjoyed the high patronage of His Majesty the King and which has proclaimed “Rabat, capital of South-South cooperation”. For his part, vice president of Parlasur, the Brazilian Celso Rossumanno stressed that “Morocco is a very important country for Mercosur,” noting that Brazil is the first trading partner of the Kingdom in Latin America. Following talks with Mayara, president of the Inter-Parliamentary Union (IPU), the Portuguese Duarte Pacheco, welcomed in a similar statement, the excellent level of relations between the IPU and the Moroccan Parliament. He announced the implementation of a roadmap that includes a meeting at a later date of the IPU General Assembly in Morocco, in the presence of over 55 delegations and a thousand MPs. “Thus, he said we will move in the direction of strengthening democracy for a better world”.