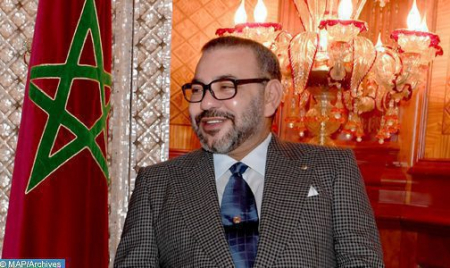 HM King Mohammed VI has underlined the importance of developing “additional financing options of a structural nature” to help African countries with regards to the debt issue, which constitutes one of the biggest economic challenges they are facing. In a message to the Meeting of the African Caucus of Finance Ministers and Central Bank Governors of African Countries members of the World Bank and the International Monetary Fund, which kicked off Tuesday in Marrakech, the Sovereign underlined that these options should be based mostly on the mobilization of more domestic resources through structural reforms. “With that in mind, it is important to develop additional financing options of a structural nature, based mostly on the mobilization of more domestic resources through structural reforms that increase the effectiveness of tax systems, ensure efficient public spending and attract foreign investment, in addition to developing public-private partnership mechanisms,” HM the King pointed out in this message, which was read out by Minister of Economy and Finance, Nadia Fettah Alaoui. In this regard, the Bretton Woods institutions, in cooperation with other regional and international financial institutions, should come up with technical solutions and appropriate financing mechanisms to improve the debt situation in African nations, especially low-income countries, HM the King said, noting, however, that, such financing solutions are of a provisional nature given the huge financing gap African countries are grappling with. “Indeed, African countries have significant financing needs, to the tune of hundreds of billions of dollars annually,” the Monarch added. HM the King noted that the high levels of indebtedness and the climate change phenomenon constitute a major challenge threatening the stability of African economies and the sustainability of their development models, noting that digital transition provides enormous development opportunities for African countries. “They should be optimally leveraged,” the Sovereign added. Regarding the debt issue, HM the King said that it questions the entire international community, not just because of the increasing burden it poses on most African countries’ limited resources for development, but also because it compromises the future of upcoming generations as well as their legitimate right to development and prosperity.   Climate change, one of the most urgent challenges facing Africa “On a different level, the problem of climate change is one of the most urgent challenges facing our continent, given its serious, long-term consequences on life in our countries,” the Sovereign pointed out. Although African nations account for the smallest share of greenhouse gas emissions which cause climate change, they are, sadly, among the countries most affected by the impacts of this phenomenon, as shown by successive years of drought, declining rainfall and the accelerated pace of desertification, said HM the King, who called on the international community to listen to African countries in this regard, and to mobilize the necessary financial and technical resources needed to assist African countries in their efforts to mitigate the effects of climate change or adapt to them. “To date, Africa remains the continent that has benefited the least from the funds pledged within the framework of the Paris climate agreement,” the Monarch added. HM the King urged African countries to revisit their development models to promote more sustainable production and consumption patterns that take into account climate change constraints, be it with respect to the quantity of natural resources available or the nature of the economic options applied.   Digital technology, an economic option With regards to digital technology, the Sovereign underlined that it constitutes “a structural shift in our approach to the world around us,” adding that this technology makes it possible to develop new production and consumption patterns that can create more jobs and greater investment opportunities. Similarly, digital media are a distinct means for increasing financial inclusion and expanding health and social coverage, HM the King stressed, adding that digitalization, as an economic option, requires sufficient and skilled human resources. “Moreover, digital culture should become part and parcel of society, and technical infrastructure that enables us to keep abreast of rapid changes in the sector should be developed,” the Monarch pointed out. Although digitalization has complex repercussions that are difficult to deal with, it is still necessary to accelerate the pace of digital transformation in African societies in order to close the gap with developed countries and reap the fruits of the digital revolution the world is witnessing today, HM the King said. “To this end, we need to come up with the financial and human resources required to rise to this challenge, and to mobilize skilled African resources in order to devise digital solutions tailored to our countries’ cultural and social particularities,” the Sovereign underlined.