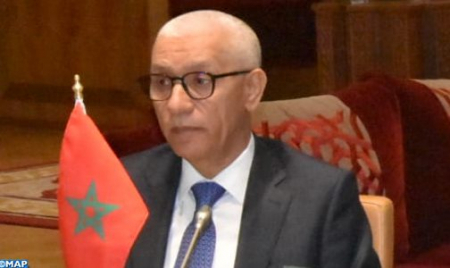 The Moroccan-Andean Community Parliamentary Forum charts a new horizon for multilateral parliamentary cooperation, said, Tuesday, the Speaker of the House of Representatives (Lower House), Rachid Talbi Alami. This initiative reflects the development of relations between Morocco and the Andean Community, as well as a clear and serious will to advance in promoting partnership given the significant global challenges imposed, namely in security, energy, climate change, migration, and other areas, Talbi Alami said in his speech at the opening of the forum hosted by the Moroccan Parliament. The Forum is an opportunity to discuss numerous questions in order to coordinate legislation, consolidate cooperation between the Member States, support participatory democracy, and reinforce development for our peoples, he said, adding that Morocco aspires “towards advancing the economic ties that link us with Andean countries and to develop our position as a qualitative partner in Africa and the Arab world with your community,” in a world where borders no longer have the same impact on the movement of goods, services, and investments. Talbi Alami has also highlighted the strength of relations with member states of this regional organization. “We would have loved for our region to have the same opportunities and to reinforce the economic and commercial links with countries of the Maghreb,” he stated. “However, and unfortunately, all the attempts, including the call of His Majesty King Mohammed VI, may God aid him, to open borders with brotherly Algeria, have found nothing but its stubborn leaders who insist on keeping the borders closed in the face of the movement of goods, products, and people. This approach does nothing but harm the peoples of the whole region and force it to waste its chance at development, integration, and economic and social complementarity,” the Lower House Speaker deplored. The organization of this parliamentary forum lays “the ground today for a near future characterized by collective efforts to support the economic and commercial cooperation ties, provide decent living conditions for our peoples, and achieve their prosperity and growth,” Talbi Alami added, welcoming the choice of energy security as a second theme for discussion in this Forum. In this regard, he expressed the willingness of Morocco to put its pioneering experience in the field of renewable and clean energy at the disposal of Andean States, noting that national strategy, in this area, aims to achieve energy efficiency and autonomy, as well as contributing to the reduction of greenhouse gas emissions. “The debate that gathers us today manifests the importance of creating multilateral initiatives similar to the one we are launching today, intending to exchange expertise, coordinate positions, and consolidate political consultation to reinforce communication and solidarity between our countries,” he stressed. This Parliamentary Forum, which addresses two major themes that are “economic cooperation and trade” and “energy security”, is held in the context of the visit of members of the Andean Parliament in the Kingdom, from July 1 to 9, at the invitation of the Moroccan Parliament. This visit is part of the strengthening of South-South cooperation advocated by His Majesty King Mohammed VI, as well as the consolidation of the existing partnership between the Moroccan Parliament and the Andean Parliament, in addition to the consultation and exchange on a range of issues of common interest. The forum is also an opportunity to review opportunities and potential offered by the Kingdom, considered as a gateway to African continent and Arab world, as well as those offered by Andean countries as a platform to access the Atlantic economic space, in addition to taking advantage of the promising potential of Moroccan-Andean relations. The Moroccan Parliament and Andean Parliament had signed, in July 2018 at the headquarters of the House of Advisors, a memorandum of understanding (MoU) to establish channels of communication and parliamentary interaction through the exchange of visits, experiences, information and documents. Under this MoU, the Moroccan parliament enjoys the status of advanced partner with this parliamentary organization created in 1979 with the aim of harmonizing legislation and accelerating integration between member countries of this group.