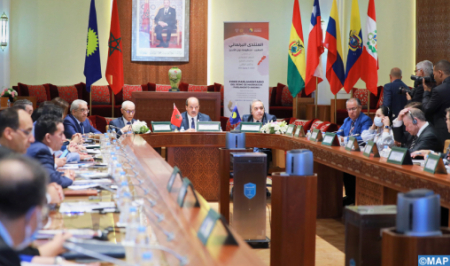 The Morocco-Andean Community parliamentary forum, focused on economic cooperation, trade and energy security, began Tuesday at the headquarters of the Moroccan Parliament. The forum, organized as part of the visit of members of the Andean Parliament in the Kingdom from 1 to 9 July at the invitation of the Moroccan Parliament, is part of the strengthening of South-South cooperation advocated by HM King Mohammed VI, as well as the consolidation of the partnership between the Moroccan Parliament and its Andean counterpart, in addition to the consultation and exchange on a range of issues of common interest. The forum is an opportunity to review the opportunities and potential offered by the Kingdom, considered a gateway to the African continent and the Arab world, as well as the Andean countries as a platform to access the Atlantic economic space, in addition to taking advantage of the promising potential of Moroccan-Andean relations. The Andean Parliament, had held Monday in Laayoune, the work of its regular session, a first of its kind held outside the member states of this regional organization. The visit of members of the Andean Parliament in Laayoune was an opportunity for officials to learn more about the dynamics of socio-economic development in the region of Laayoune-Sakia El Hamra. The Moroccan Parliament and the Andean Parliament had signed in July 2018 at the headquarters of the House of Advisors, a memorandum of understanding to establish channels of communication and parliamentary interaction through the exchange of visits, experiences, information and documents. Under this memorandum of understanding, the Moroccan Parliament has the status of advanced partner with this parliamentary organization. The Parliament of the Andean Community is a parliamentary organization created in 1979 with the aim of harmonizing legislation and accelerating integration among the member countries of this group.