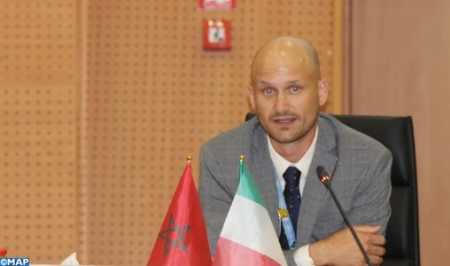 Morocco’s diplomatic soft power is becoming a model for development and geopolitical stability in North Africa, said Tuesday in Settat, the Italian expert in international relations, Matteo Jacque Dominici. At an international symposium initiated by the Foundation Joudour (roots) for Moroccans in the world on the theme “The autonomy initiative and the bankruptcy of the separatist thesis and self-determination,” Dominici said that the international relations of Morocco have diversified and expanded both at the level of actors and that of the strategic directions of its foreign policy, which through an enlightened use of “Soft Power”, have enabled the country to occupy a major role on the international geopolitical scene. He added that the Kingdom has become a key player and a model for development and social, economic and environmental stability in North Africa and this, through several major actions by state institutions focused on a vision of “Soft Power” “Made in Morocco. In this sense, the Italian expert noted that there is a need to distinguish between three main aspects of Moroccan soft power, namely the economic aspect, the security and religious component and finally the migration aspect. Regarding the economic constituent, he explained that Morocco’s policy is a key instrument of its diplomacy, noting that under the reign of HM King Mohammed VI, entrepreneurship has been at the center of the foreign policy of the Kingdom as evidenced by the strong presence of many Moroccan companies in the African market in various sectors. As far as concern the security and religious aspects, Dominici said that the “moderate” and “modern” Islam allows the Kingdom to stand out as a model of stability in the face of Salafism and other radical currents present in many countries of the Sahel-Saharan region, recalling the close religious ties that Morocco has maintained for centuries with many African countries following the Maliki rite. Concerning the migration component, the Italian expert noted that the migration issue is a priority in Morocco, which has launched in recent years a process of mass regularization of the situation of sub-Saharan foreigners and worked with Spain, in respect of human rights, to manage the massive influx of migrants. According to him, these are the main features of Morocco’s diplomatic action at the international level and for which it is recognized as a reliable, credible and structured actor.