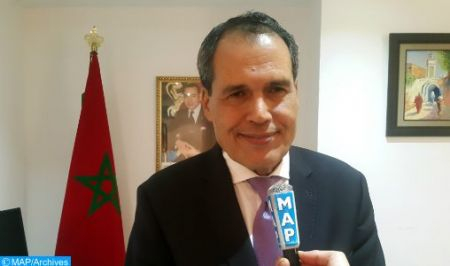 The Moroccan ambassador to Mauritania, Hamid Chabar, hailed, Thursday, the strength of Moroccan-Mauritanian relations, pleading for a strong and united partnership between the two countries. Speaking at a symposium organized at the headquarters of the Mauritanian parliament by the Mauritanian-Moroccan parliamentary friendship group under the sign “The reality and prospects of Mauritanian-Moroccan cooperation,” the diplomat stressed the strength of these unique relations that embody strong historical and civilizational ties, as well as human, social, ethnic, religious and cultural relations between the two brotherly peoples. He said that the ambition of Morocco is to build this cooperation into a strong, exceptional and solidarity-based partnership that preserves the interests of both parties and develops in a win-win framework. The diplomat reported a strong desire to further strengthen these relations in accordance with the guidelines of the leaders of both countries, His Majesty King Mohammed VI and president Mohamed Ould Cheikh El Ghazouani. He said that to establish a true partnership and achieve economic integration, a strong impetus should be given to investment in sectors considered priorities for both countries. In the current global context, noted Chabar, Mauritania can benefit from the recognized experience developed by Morocco in the field of sectoral strategies in agriculture, industry, tourism and services. Morocco has also embarked on the policy of carrying out major projects that have enabled it to develop its infrastructure in order to strengthen its competitive capacity to attract more foreign investment, he said. He explained that these strategies focus on two main areas, the first of which is the modernization of certain sectors such as agriculture (Green Morocco Plan), fisheries (Halieutis strategy) and industry (Industrial Acceleration Plan), as well as the development of other areas such as the automotive industry, renewable energies, aeronautics, logistics and services with high added value. After noting that these strategies have enabled Morocco to build a diversified economy and open to its environment, the ambassador said that the Kingdom is willing to put its experience and expertise at the disposal of Mauritania and to provide its experience accumulated in all areas. He added that the Kingdom is also willing to put its experience in the agricultural field in favor of Mauritania, which has fertile land and significant water resources, which should help achieve food security of the country and reduce its imports of foodstuffs, or even the possibility of becoming an exporter to the rest of the Sahel countries and West Africa and even Europe.