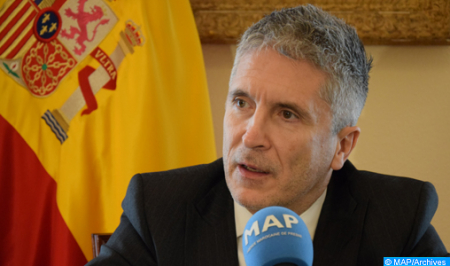 Spanish Minister of the Interior, Fernando Grande-Marlaska, reaffirmed his country’s commitment to continue collaboration with Morocco in migration management and the fight against human trafficking mafias. “I reiterate, once again, Spain’s commitment to continue collaborating with countries of origin and transit, in particular with Morocco, which is doing important work and must be recognized as such,” the minister underlined in a statement issued by on Saturday by the Spanish Ministry of the Interior, the day after the meeting, held in Rabat, with the European Commissioner for Home Affairs, Ylva Johansson, and the Moroccan minister of the Interior, Abdelouafi Laftit. Welcoming “the agreements reached at Rabat’s meeting”, the Spanish minister said that this commitment “shows that we continue to work together” to face the challenges linked to illegal immigration. Following the “violent” assault on June 24, “we are more determined to deepen the management of irregular migration and to deal strongly with criminal organizations that use violence and migrants to achieve their illicit objectives,” he pointed out. “We will continue to work in depth to secure the necessary means to save the lives that are threatened by criminal mafias, and we will continue on the path of cooperation between Morocco and the European Union, in order to deal firmly with irregular immigration,” the minister added. The European Commission and Morocco launched, Friday in Rabat, a renewed partnership on migration and the fight against human trafficking networks, particularly following the emergence of new extremely violent methods adopted by these criminal networks. The new operational partnership in the fight against human trafficking between Rabat and Brussels may cover in particular support for border management, the strengthening of police cooperation, including joint investigations, raising awareness of the dangers of irregular migration, in addition to the reinforcement of cooperation with the European Union agencies in charge of home affairs.