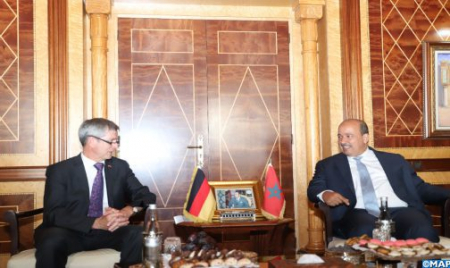 Speaker of the House of Advisors, Naama Mayara held on Wednesday talks with the German ambassador to Morocco, Robert Dölger, focusing on bilateral cooperation and ways to deepen it, in addition to exchanging views on several regional issues of common interest. On this occasion, Mayara highlighted the new stage of bilateral relations, under the leadership of HM King Mohammed VI and the German President, said a statement by the upper house He also emphasized the importance of the German experience in the economic and political fields and especially the regionalization and participatory democracy. Mayara also stressed the role of joint parliamentary action in the development of bilateral relations, highlighting the importance of the group of friendship and cooperation formed by the upper house to back this dynamic. For his part, Dölger recalled the conditions for the revival of bilateral political and diplomatic cooperation that open prospects for a prosperous common future, calling to expand its areas to include renewable energy, the fight against drought and food security. The diplomat also stressed the importance of consolidating bilateral parliamentary cooperation, expressing the firm determination of Germany and the EU to deepen cooperation with Morocco. On the political level, Mayara expressed his great consideration for the new German position on the issue of the Moroccan Sahara, supporting the autonomy plan, noting that this position comes in addition to other constructive stances of European countries including Spain and the Netherlands. In this regard, the German diplomat stressed that the position of his country is a new framework for bilateral cooperation, reiterating Germany’s support for UN efforts to find a lasting and acceptable solution to this regional conflict. The meeting was an opportunity to highlight the convergence of views of both parties on several regional issues, including the Sahel-Saharan region which faces challenges related to terrorism, organized crime, drought and famine among others. On the other hand, the speaker of the House of Advisors referred to the issue of illegal migration, pleading for a comprehensive approach and adherence of all parties concerned to solve this problem.