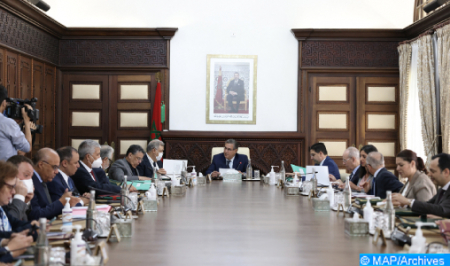 The Council of Government, meeting Tuesday via videoconferencing under the chairmanship of the Head of Government, Aziz Akhannouch, were informed about two draft framework bills and two draft decrees prior to submitting them to the Council of Ministers. These are framework bill 06-22 on the national health system, introduced by the Minister of Health and Social Protection, Khalid Ait Taleb, and framework bill 03-22 forming the Charter of Investment, introduced by the Minister Delegate to the Head of Government in charge of Investment, Convergence and Evaluation of Public Policies, Mohcine Jazouli, said a statement from the Ministry in charge of Relations with Parliament. The Government was also informed of draft decree 2.21.346 implementing law 42.18 on controlling the exports of goods intended for dual civil and military use and related services, submitted by Minister of Industry and Trade Ryad Mezzour, and draft decree 2. 22.169 supplementing Decree 2.65.046 on the status of military attachés, their deputies and other military personnel assigned to them, introduced by Minister Delegate to the Head of Government in charge of the administration of National Defense, Abdellatif Loudiyi.