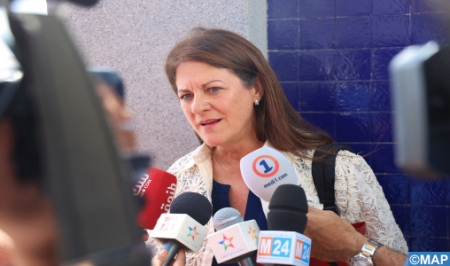 The autonomy plan, presented by Morocco to end the artificial conflict over the Moroccan Sahara, is “realistic, credible and achievable”, and is a real lever for development, stressed the former Spanish Minister of Housing, Maria Antonia Trujillo Rincon. In a statement to the press on the sidelines of the 1st Moroccan-Spanish Mediterranean Forum, under the theme “The territorial organization and the experience of regionalization in Morocco, Spain and Italy: crossed readings,” Trujillo Rincon said that the autonomy plan, announced in 2007, is “a sovereign advanced and realistic regional initiative and a sustainable and ambitious roadmap.” “The enemies of the territorial integrity of Morocco reject, by ignorance and lack of knowledge, this important project that meets the aspirations of the population of the region,” she noted. The project of advanced regionalization, stipulated in the Moroccan Constitution, gives the southern provinces of the Kingdom broad prerogatives to manage local affairs and all issues of interest to the population of the region, noted the former minister in the government of José Luís Rodriguez Zapatero. “The conflict over the Moroccan Sahara is artificial and does not address the issues of citizens and their socio-economic and development aspirations,” she said. Morocco has taken an important step in the Constitution of 2011, to establish a new regional model, which enshrines pluralism and diversity, reserving, for the first time, an entire section to the regions (Title IX) and stipulating, in Article 1, that “the territorial organization of the Kingdom is decentralized” and “based on advanced regionalization”, she stressed. In this regard, Trujillo Rincon considered that “the theses of the enemies of the territorial integrity of the Kingdom on the Moroccan autonomy plan are false and show that they are ignorant of the content of this plan and important legislation related to it, since they come from people who are ignorant of the history of Morocco or deliberately neglect it”. The Spanish academician said that the southern provinces of the Kingdom have experienced great progress and continuous development, noting that Morocco has the right to choose a regional model that meets the aspirations of the population and development objectives, according to its own perceptions as a country that enjoys full sovereignty over all its territories. “I have personally observed, during several field visits, that the Moroccan Sahara, like other regions of the Kingdom, fully adheres to the new development model of Morocco, which has made great efforts in the southern provinces at all levels, especially in the social and human rights,” she said.