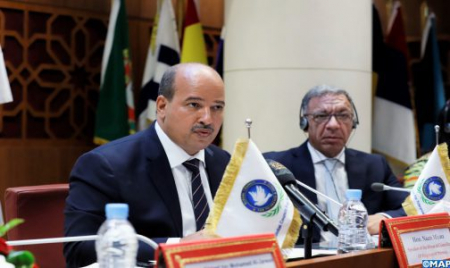 Speaker of the House of Advisors, Naama Mayara, called Thursday in Rabat to strengthen the role of the Global Parliament for Tolerance and Peace to make it a forum for the defense of tolerant societies. Speaking at the opening of the 10th session of the said parliament held from 13 to 15 July in Rabat and Dakhla, Mayara called to make this institution a force of proposal to conduct reflections on ways to curb the discourse of hate and violent extremism. This session provides an opportunity to share ideas and enrich the debate around current issues, in the wake of the emergence of phenomena and multidimensional factors that feed extremism, hatred, rejection of the other, instability and intolerance, said the speaker of the upper house. The collective parliamentary action should be focused on strengthening dialogue and understanding between cultures and peoples, proposing solutions to the problems in many areas of tension, as well as eradicating the economic, social and development sources of these problems that affect peace and security, he said. In this regard, the Moroccan Parliament intends to deploy more efforts and work, through legislative initiatives and efficient public policies, for the social inclusion of the most vulnerable and precarious categories that are most at risk of falling into fanaticism and religious extremism, said Mayara. He added that employment policies, the development of education and training, social justice policies, as well as the fight against hate speech are essential elements for the eradication of the structural causes of intolerance.