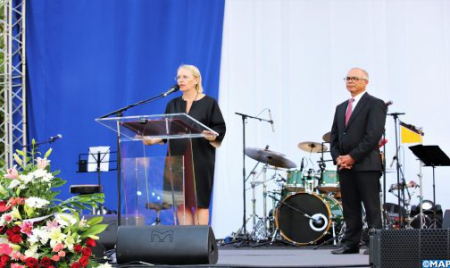 French ambassador to Morocco, Hélène Le Gal, commended, Thursday in Rabat, the excellent French-Moroccan partnership relations, during a reception held on the occasion of the celebration of French National Day on July 14. “France and Morocco is much history, it is an exceptional, dense, innovative and multidimensional partnership, borne by His Majesty King Mohammed VI and President of France Emmanuel Macron,” Ms. Le Gal said, adding that Morocco offers a “very promising” prospects for a win-win partnership with France. “Morocco is a natural ally of France and the European Union. such complementarity is obvious in terms of the industrial value chain, energy, migration, or projection towards Africa, she noted. The ambition of the “two brotherly countries” is to face the crises and strengthen resilience, said the French diplomat, who praised the ancestral, strong and intense relations between the two countries. Minister of National Education, Preschool and Sports, Chakib Benmoussa, described as “exceptional” the partnership between Rabat and Paris. The Moroccan-French relationship is secular, built on a peaceful memory, a shared history, and a convergence of interests, he said. The Morocco-France partnership is described as exceptional because it is characterized by the comprehensive nature of bilateral, regional and multilateral cooperation that addresses multiple themes, and by the multiplicity and diversity of its channels, he said. The celebration of the French national holiday ended in beauty with a musical performance by the French-Moroccan singer, Sonia Noor. This grandiose reception took place in the presence of senior public officials, parliamentarians, representatives of the diplomatic corps accredited to Morocco, the French community established in Morocco and representatives of the civil society.