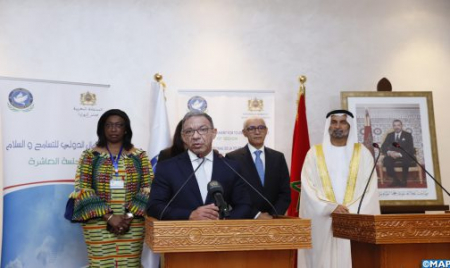 Morocco is “a bright model for the promotion of peace and tolerance, not only for African and Arab countries but for the whole world,” the President of the Inter-Parliamentary Union (IPU), Duarte Pacheco, said. Speaking at a joint press briefing after the opening of the 10th plenary session of the International Parliament for Tolerance and Peace, a body of the Global Council for Tolerance and Peace (GCTP), Pacheco noted that “the Global Council has been successful in choosing the location of this meeting, namely the Kingdom of Morocco, a country of democracy and a land of peace and respect for the other.” The 10th plenary session of the International Parliament for Tolerance and Peace is taking place in the cities of Rabat and Dakhla on July 13-15. IPU head said he was pleased “to be in Rabat, the capital of the Kingdom of Morocco, to discuss issues of great importance to the world with a particular focus on the challenges of ensuring food for all and eliminating hunger as one of the goals of the Millennium Development Goals, in a context marked by the negative impact of the Russian-Ukrainian war on the supply of foodstuffs to several countries.” “We share the same noble values: tolerance, peace, democracy and acceptance of the other, regardless of color, race and creed,” he said, noting that “our thoughts, cultures and religions may be different, but we all live in our shared home, our planet, and we must work together to safeguard it.” According to Mr. Pacheco, dialogue remains the only way to resolve disputes in our world, and “if we aspire to a secure world in which every individual and every country live in peace … we must realize that tolerance and mutual respect are essential.” Regarding the Russian-Ukrainian conflict, he said it started as a regional dispute and then turned into a global conflict with disastrous effects on food and energy supplies and soaring inflation rates in major economies. Food for all is a very important issue to maintain peace and respect in our world, Pacheco observed, adding that parliamentarians have a special responsibility in promoting dialogue between countries, listening, and mutual respect.