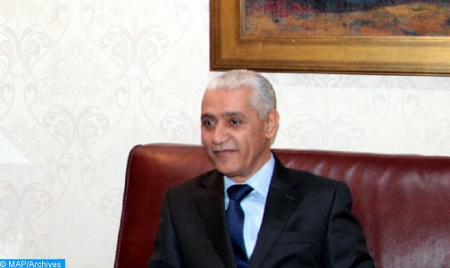 The holding of the session of the Global Parliament for Tolerance and Peace in Dakhla is a bold message of peace, in line with the principles of law and international legality, said speaker of the House of Representatives, Rachid Talbi Alami. Speaking at the closing session of the 10th Global Parliament for Tolerance and Peace in Dakhla, Talbi Alami welcomed the decision of the Global Council for Tolerance and Peace (GCTP) to hold this parliamentary session in Dakhla, stressing that this is a bold and responsible initiative and is in harmony with the institutional guidelines of the Council (…) to address issues related to international peace and to promote the values of dialogue and tolerance. This initiative also provides for the dissemination of the values and principles of peace, in addition to the consolidation of the rules of international law, noted Talbi Alami, stressing the need to respect the values of dialogue and pluralism, taking into account the interests of countries, while respecting the laws, norms and international rules agreed within the framework of the United Nations and by the international community. The speaker of the House of Representatives also recalled that Morocco had presented the autonomy plan, within the framework of the sovereignty of the Kingdom and its national unity and territorial integrity, as “a consensual, open and responsible framework”, allowing the population of the Moroccan Sahara to manage its local affairs democratically and autonomously and to choose its legislative, representative and judicial bodies. Talbi Alami stressed, in this regard, that the Moroccan autonomy plan enjoys the support of various international powers, noting that everyone has taken note of the relevance of the autonomy plan presented by Morocco to end the artificial conflict over the Moroccan Sahara. In addition, he said that the regionalization process, based on constitutional, political, economic, socio-cultural and strategic foundations, is moving forward today with sure steps, according to a clear vision, looking to the future, noting that sustained efforts have been made to continue the achievements of this pioneering project to which His Majesty King Mohammed VI attaches particular interest. On this occasion, it was proceeded to the election of Mohamed Ahamed Zoubeiri of the Union of Comoros, as the new president of the Global Parliament for Tolerance and Peace for the term (2022-2023), succeeding the Colombian Margarita Maria Restrepo Arango. In addition, two cooperation agreements were signed, the first between the GCTP and the House of Representatives, while the second was concluded between the GCTP and the Uruguayan Parliament.