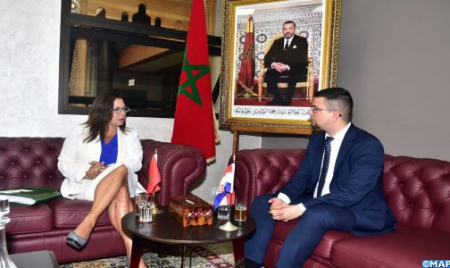 The Chairwoman of the Committee on Foreign Affairs, National Defense and Moroccans Abroad at the House of Advisors, Neila Mia Tazi, held, Thursday at the headquarters of the upper house, a meeting with the Chairman of the Committee on European Affairs in the Croatian Parliament and president of the Croatia-Morocco Parliamentary Friendship Group, Domagoj Hajduković. This meeting was an opportunity for both parties to welcome the dynamics of bilateral relations, said the House of Advisors in a statement. On this occasion, Domagoj Hajduković stressed the need to strengthen this momentum on the economic and commercial levels through related partnerships, highlighting the role of the parliamentary friendship group in supporting the governmental orientations of both countries, said the statement. He also praised Morocco’s economic, political and social reforms in various areas, as well as its achievements in infrastructure and major projects launched throughout the country. The Croatian parliamentary official also recalled the constant position of Croatia with regard to the issue of the territorial integrity of the Kingdom, referring to the current international situation, characterized by the emergence of new tensions and crises, such as those related to health, food and energy security and which can be overcome only through cooperation. Furthermore, he highly commended the leadership role of HM King Mohammed VI, Commander of the Faithful, in the dissemination of the values of peace, tolerance and spiritual security at the national, regional, continental and international levels, expressing, in this regard, his great esteem and admiration for the High Solicitude of the Kings of the Alaouite Dynasty for the Jewish community. For her part, Neila Tazi stressed the importance of relations between the two countries and the role of the Croatia-Morocco parliamentary friendship group, the same source added. She also shed light on the Moroccan parliamentary experience in general and that of the House of Advisors in particular, reviewing its composition and the actions carried out by the team of the Moroccan Employers’ Association (CGEM) as a body that places the economic and social dimensions among its priorities. Tazi expressed the willingness of all bodies and public and private institutions to cooperate and coordinate to develop the partnership between the two countries, welcoming, in this sense, the position of Croatia in favor of the territorial integrity of the Kingdom. She also called on the Croatian official to visit the southern provinces of the Kingdom to see closely the level of economic development, social and urban planning in this region. Tazi also pointed out that the Sovereign’s high concern for the members of the Jewish community is rooted in the Kingdom’s age-old history, of which the Jewish component is one of the tributaries and part of its identity as stipulated by the Constitution.