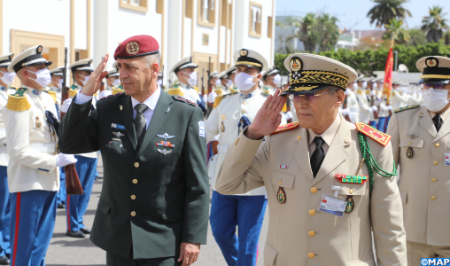 Under High Royal Instructions, Minister Delegate to the Head of Government in charge of National Defense Administration,Abdeltif Loudiyi, received, Tuesday at the headquarters of his administration, Lieutenant General Aviv Kohavi, Chief of General Staff of the Israel Defense Forces, who leads a large delegation on a working visit to the Kingdom of Morocco. This visit comes to consolidate the bilateral cooperation initiated by the historic signing before HM King Mohammed VI of the Morocco-US-Israel tripartite agreement on December 22, 2020. The latter was followed by the signing, on November 24, 2021, of a Memorandum of Understanding in the field of defense cooperation by the Israeli Minister of Defense and the Minister Delegate in charge of National Defense Administration, said a statement from the General Staff of the Royal Armed Forces (FAR). Mr. Loudyi highlighted the constant commitment, under the leadership of HM the King, to managing security challenges, the migration crisis, the Covid-19 pandemic, and the deployment of many initiatives for the approximation of peoples with a view to serving the goals of peace and stability in the Middle East, according to the same source. The Chief of General Staff of the Israeli Defense Forces took this opportunity to commend the important role played by Morocco, under the enlightened leadership of His Majesty King Mohammed VI, as an actor for stability and peace in the African continent and the Middle East. In the field of defense and with a view to establishing the foundations of our defense industry, Mr. Loudyi affirmed our interest in jointly setting up defense industrial projects in Morocco, the statement said. Welcoming the quality and dynamics of bilateral military cooperation, the two leaders reiterated their ambition and their common will to consolidate these relations to serve the goals of peace and stability in our region. Earlier in the day, and upon High Instructions of HM the King, Supreme Commander and Chief of General Staff of the Royal Armed Forces, Lieutenant General, FAR Inspector General, Commander of Southern Zone received Lieutenant General Aviv Kohavi, at the FAR General Staff in Rabat. During their talks, the two military officials voiced their satisfaction with the level of Moroccan-Israeli relations as reflected by the exchange of experiences and expertise, and participation in joint training exercises, including the recent participation of the Israeli army in the African Lion 2022 multilateral military exercise, organized by Morocco and the USA. This visit, which reflects the excellent Moroccan-Israeli military cooperation, also allowed to examine the opportunities to further develop the axes of this cooperation in the areas of training, technology transfer and experience and expertise sharing between the Royal Armed Forces and the Israeli Armed Forces, the statement concluded.