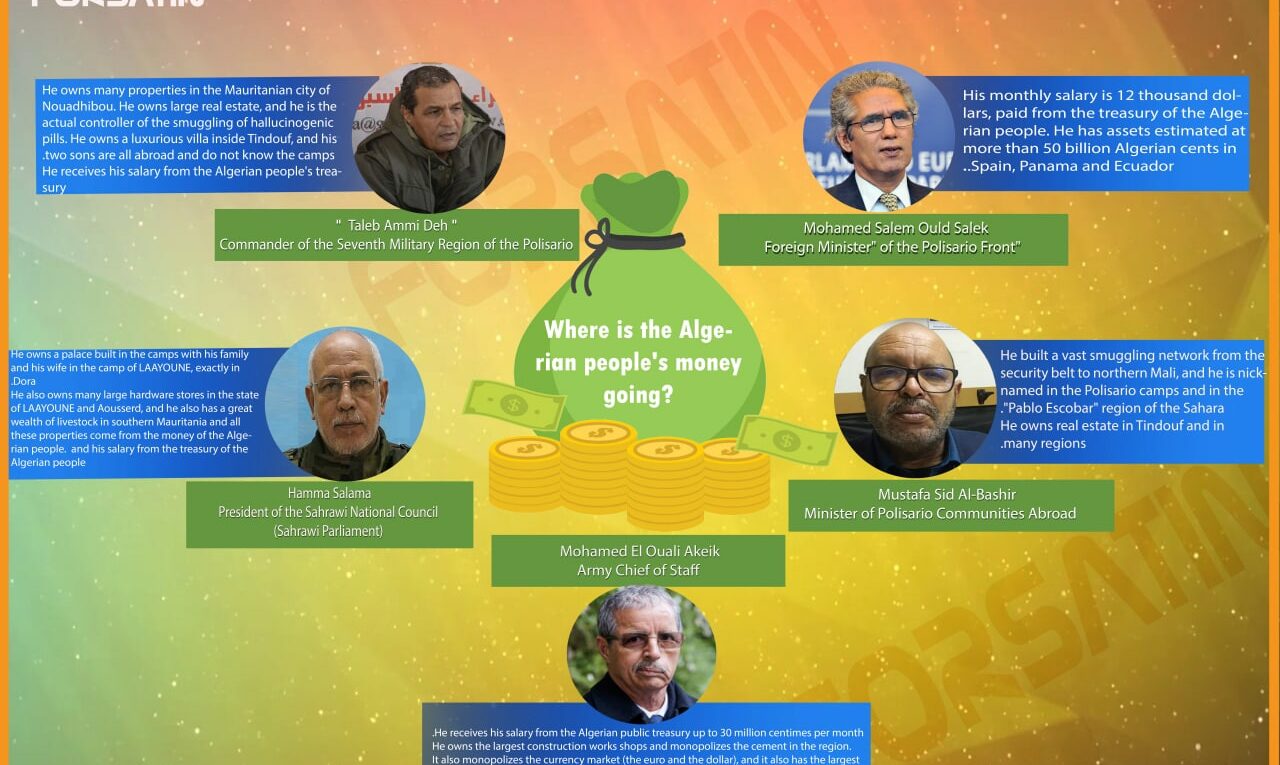 The only current concerne raised among the residents of the camps is about the news leaked in regards of some leaders of the Polisario Front. Some secrets were revealed about a criminal network led by the polisario leadership, which is responsible of criminal acts and running mafias.
After the scandal of the Minister of Foreign Affairs and his smuggling of funds from the camps, to open medical clinics in Panama and Ecuador for his son. It seems that the Minister of Foreign Affairs is not the only polisario notable accused of smuggling. Although many information was leaked about him, especially in regard to his son, other news about his brother, Bolsan, the ambassador of Cuba were revealed about his personal support to this subject.
For information, the Polisario ambassador in Cuba is considered as one of the most dangerous smugglers and money launderers in the camps. He ran and controlled mafias networks during his responsibility in Las Palmas, since he knew the entrances and exits of money in the Polisario Front.
We have previously mentioned the Red Crescent Foundation of the Polisario Front, which is nothing but a money laundering company inside the camps. This company is responsible of the sale and the smuggling of humanitarian aid and medical equipment. It is also the same institution that establishes fictitious companies in Panama, through other fictitious companies, led by the sons of leaders and notables of the leadership of the Polisario.
It is a large network that makes it easier for leaders of polisario to buy houses, to travel abroad easily, to own real estate, to enter percentages in a number of major companies, and it is also responsible for speculation in international stock exchanges.
The red Crescent Foundation operates under the leadership of Algerian officials, who keep track of everything. They receive reports on the regulations involved in the support, its nature, and the number of funds granted.
It is worth noting that the leaked financial scandals of the Polisario leadership includes data on the expenses of the Ministry of Foreign Affairs of the Polisario Front, starting with the Minister of Foreign Affairs, Mohamed Salem Ould Salek, who receives from the Algerian state a monthly salary of 12 thousands dollars. It is to be noted that Algeria also pays the expenses of diplomatic representations and their employees. Those expenses exceeds tens of thousands per month. The leaks also concerned the property of leaders abroad, led by the same minister, who owns more than 50 billion Algerian cents in Spain, Panama and Ecuador.
While a number of prominent leaders own expensive real estate in neighboring countries, among them, Taleb Ami Dih, the commander of the Seventh Military Region. He is also responsible of the Polisario’s properties in Mauritania, especially Nouadhibou.

Taleb Ami Dih and the Minister of the so-called Communities and the Occupied Territories, Mustafa Sayed Al-Bashir, are accused of smuggling the money collected through the Red Crescent Foundation and running the Polisario Front’s drug trade.

The coming days will be full of surprises. The anxiety prevails inside the camps is increasing , especially after the population of the camps have discovered the thefts of the leaders trusted by Algeria to manage Tinduf camps. While Algeria hand them the money, the Polisario Front wreaks havoc, runs criminal networks and international gangs, smuggles money, bleaches it and shares it among them, in a form of property and family projects, while the Sahrawis lives are in woe and deprivation.