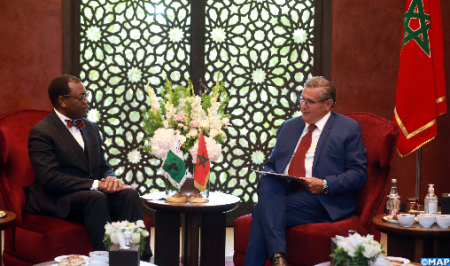 Head of Government Aziz Akhannouch held talks on Wednesday in Marrakech with Mr. Akinwumi Adesina, President of the African Development Bank Group (AfDB), who is on a working visit to Morocco, accompanied by a large delegation. Talks focused on the various aspects of the partnership between Morocco and the AfDB, and on ways to further strengthen and develop it. The meeting was also an opportunity to discuss the challenges facing the world’s economies. The Head of Government reviewed the various strategies and programs launched by Morocco under the enlightened leadership of His Majesty King Mohammed VI. Mr. Akhannouch recalled that despite the global economic situation, the Government has continued to implement structural reforms according to the approved agenda, and to support social programs, whether in health, education, or social protection. The meeting took place in the presence of Nadia Fettah Alaoui, Minister of Economy and Finance, Younes Sekkouri, Minister of Economic Integration, Micro-Entrepreneurship, Employment and Skills, and Mohcine Jazouli, Minister Delegate to the Head of Government in charge of Investment, Convergence and Evaluation of Public Policies.