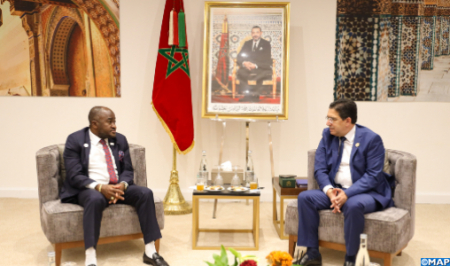 Liberia’s Foreign Minister, Dee-Maxwell Saah Kemayah voiced, Wednesday in Marrakech, his country’s commitment to strengthen relations between Monrovia and Rabat. “Relations between the Republic of Liberia and the Kingdom of Morocco have developed strongly in recent years,” said the head of Liberian diplomacy at a press briefing following his talks with the Minister of Foreign Affairs, International Cooperation and Moroccans abroad, Nasser Bourita, on the sidelines of the opening of the 14th U.S.-Africa Business Summit, held under the High Patronage of HM King Mohammed VI under the theme “Building the future together.” Mr. Saah Kemayah stressed that this meeting was an opportunity to “reaffirm our relations of brotherhood and express the deep interest in maintaining these relations and expanding the areas of cooperation to other sectors, including agriculture, mining, energy, tourism, and education. The two sides also reaffirmed the importance of promoting their economic relations and raising the level of their trade, the Liberian minister noted. Contacts between economic stakeholders of the two countries will be stimulated, and the business communities and investors of both countries are invited to fully explore the opportunities offered by the two growing markets, he said in that regard. Liberia’s FM commended the Nigeria-Morocco gas pipeline project, saying that the highly strategic project will boost the economic integration of the entire region and will benefit all nations involved. He also welcomed the Kingdom’s support for Liberia’s national development plan. Mr. Saah Kemayah also voiced his deep appreciation to HM King Mohammed VI for his High Patronage of this important event, which constitutes an opportunity to establish future-oriented business partnerships.