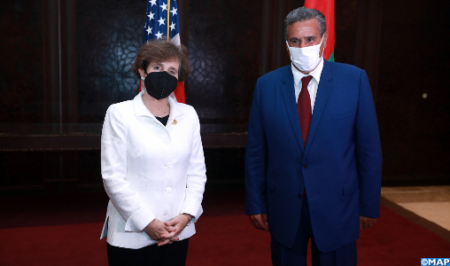 The Head of Government Aziz Akhannouch met, Wednesday in Marrakech, with the CEO of the Millennium Challenge Corporation (MCC), Alice Albright, along with the official delegation of the United States to the 14th US-Africa Business Summit. This meeting, which focused on the various aspects of partnership and cooperation between Morocco and the MCC, was also an opportunity to discuss ways and mechanisms to support the last phase of the “Millennium Challenge” program, which ends in March 2023. Expressing MCC’s satisfaction regarding the level of cooperation with Morocco, Ms. Albright congratulated the Kingdom for the projects carried out at various levels under the enlightened leadership of His Majesty King Mohammed VI. For his part, Mr. Akhannouch said that Morocco continues to implement its various commitments under the Millennium Challenge Program, signed between the Government of the Kingdom of Morocco and its American counterpart represented by the Millennium Challenge Corporation. He emphasized, in this sense, the remarkable progress made in the implementation of the various projects covered by the program, whose components are at the heart of the government’s priorities, namely education, training, employment and land management. The meeting was attended by Nadia Fettah Alaoui, Minister of Economy and Finance, Younes Sekkouri, Minister of Economic Integration, Micro-Entrepreneurship, Employment and Skills, and Mohcine Jazouli, Minister Delegate to the Head of Government in charge of Investment, Convergence and Evaluation of Public Policies.