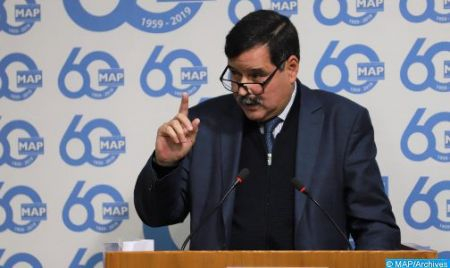 The isolation of the ruling military class in Algeria from the people is deepening and expanding, says writer-Journalist Talaâ Saoud Al Atlassi. In his weekly column the news site “Machahid 24”, published on Wednesday, the writer points out that the isolation of the “ruling military establishment from the people” deepens and expands after each decision taken by this “gang” regarding the management of public affairs in Algeria. In this regard, he refers to the “distinctive, unique and unprecedented” congratulations extended by the head of state to the thousands of students who have passed the baccalaureate exam. According to Saoud Al Atlassi, such congratulations have only one possible interpretation: “the constant need for popular attention (…) especially since the gang in power in Algeria suffers today from a sharp decline in public opinion and is desperately trying to boost it with ineffective and outdated incentives.” “Such artificial congratulations will never succeed in reducing this isolation or even supplying the ruling class with a missing popularity,” notes the author, adding that the political objective of the generals in power in Algeria is to “beg for popular sympathy”. The isolation of the Algerian regime from the people feeds its anger and agitation when it comes to its relations with Algerians and the outside world. It also deepens its hostility towards Morocco, Saoud Al Atlassi observes. This hostility towards Morocco has become the key priority of Algerian politics and creed, writes the columnist, noting that the Algerian regime’s dispute with the Kingdom over the Moroccan Sahara issue is only a tool and an outlet for that hostility In the same context, the journalist notes that Algeria’s attempt to punish Spain for its clear support for “the validity of the Moroccan peaceful effort to resolve the Moroccan Sahara dispute (…) reveals the low level of the country’s management policies,” adding that the military regime in Algeria has suffered more setbacks as a result of this “reckless behavior.” Algeria’s bet on a reversal of Spain’s new position due to Spanish internal disputes was put to rest by Morocco’s serious and realistic persuasion, Morocco’s economic, social and security potentials and Madrid’s realization of the importance of reinforcing its relations with the Kingdom. In this regard, the author recalls that the Spanish Congress of Deputies, the lower house of Parliament, has recently consolidated the position of the government of Pedro Sanchez on the issue of the Moroccan Sahara, by rejecting by a large majority “a draft resolution” asking the Spanish government to review its position on the Moroccan Sahara. This rejection confirms the clear and decisive support, within the Spanish legislative institution and among the country’s main political formations, for the approach taken by the President of the Government, Pedro Sanchez, he says. The left and the right support closer relations with Morocco and the settlement of the conflict over the Moroccan Sahara on the basis of the Moroccan autonomy plan, whose content has been adopted by the Security Council in all its recent decisions, writes Saoud Al Atlassi. In his opinion, the decision of the Spanish Parliament reflects “the culture of a state aware of its interests and of the importance of deepening its relations with a state that has the elements of international interactions based on exchange and mutual benefit.”