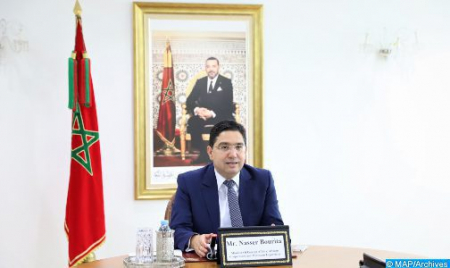 The Togolese Republic has always been a credible voice on the Moroccan Sahara issue at the level of regional and international bodies, said Thursday in Dakhla, Minister of Foreign Affairs, African Cooperation and Moroccans abroad, Nasser Bourita. “Togo has always supported Morocco regarding the Sahara issue and the preservation of the territorial integrity of the Kingdom and its national unity,” Bourita said at a joint press briefing with his Togolese counterpart Robert Dussey, following the inauguration of the Consulate General of the Republic of Togo in Dakhla. Morocco’s top diplomat noted that the opening of this consulate consolidates the consistency of this position, describing it as a strong act towards Morocco, the Moroccan people and its forces. This diplomatic representation reinforces the historical relations and strong ties between the two Heads of State, His Majesty King Mohammed VI and His Excellency Mr. Faure Gnassingbé, President of the Togolese Republic, especially as it gives concrete expression to their friendship and shared visions regarding bilateral relations and the future of the African continent in terms of peace, development and stability, based on respect for the territorial integrity of States. Beyond its highly appreciated political and diplomatic symbolism, this consulate will be a diplomatic mechanism for promoting and monitoring cooperation between the two countries and will further strengthen bilateral relations, said Bourita. Togo is among the first trade and economic partners of the Kingdom in West Africa and is an important political partner in security cooperation, he added. According to Mr. Bourita, there are many opportunities to be seized in terms of decentralized cooperation between the Dakhla-Oued Eddahab region and the Togolese regions. There are also experiences to be shared between the two countries, particularly in fisheries, tourism and urban planning. This consulate will contribute to the diplomatic and consular momentum in Dakhla with a network of diplomatic representations open on a region that is a gateway to Morocco’s African depth, he added. In the same vein, Mr. Bourita noted that all Africa’s sub-regions have diplomatic representations in the southern provinces. That is one-third of the countries. The FM added that the opening of a consular representation in Dakhla can boost bilateral relations in terms of training, adding that it has been agreed to grant 30 additional scholarships for Togolese students in training centers and institutes in Dakhla and Laayoune. These scholarships add up to 70 academic scholarships and 30 vocational training scholarships, thus bringing the number to 130 scholarships, which makes Togo a key partner among the top five African countries that have benefited from scholarships of the Moroccan Agency for International Cooperation (AMCI). Mr. Bourita recalled the upcoming holding of the joint commission and a business forum to promote bilateral cooperation between the two countries. On this occasion, Morocco’s and Togo’s FMs signed an agreement on the abolition of visas for the benefit of Moroccan and Togolese nationals, holders of ordinary passports. The inauguration ceremony took place in the presence of the Ambassador Director General of the AMCI, Mohamed Methqal, the Wali of the Dakhla-Oued Eddahab region, governor of the province of Oued Eddahab, Lamine Benomar, the president of the region, El Khattat Yanja, as well as consuls accredited to Dakhla, officials and local elected officials. With this new inauguration, the number of consulates opened in the southern provinces increased to 27 (15 in Dakhla and 12 in Laayoune).