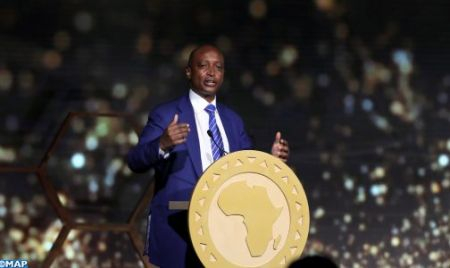 The president of the Confederation of African Football (CAF), Patrice Motsepe has highlighted the efforts made by the Kingdom of Morocco to develop African soccer. In his speech on the occasion of the CAF Awards ceremony, held Thursday evening at the Mohammed VI Football Complex in Maâmoura (near Salé), Motsepe expressed his gratitude to HM King Mohammed VI, the Moroccan people and the Royal Moroccan Football Federation for hosting the CAF Awards. “I am very grateful to His Majesty King Mohammed VI, the Moroccan people and my friend Fouzi Lekjaa, president of the Royal Moroccan Football Federation for hosting us in Morocco over the past few days,” he said in his speech. He added that “the main objective for which we are working is the development of African soccer with special interest in the talents of women and men belonging to this continent, which has given birth to the best players in the world for many years,” noting that this ceremony is intended to pay tribute to them. The president of CAF stressed the importance of the involvement of the public and private sectors in the development of African soccer, especially in terms of infrastructure and stadiums to succeed in this step to improve the African soccer scene. He estimated that the African teams qualified for the World Cup in Qatar will sign a good performance during this international sporting event.