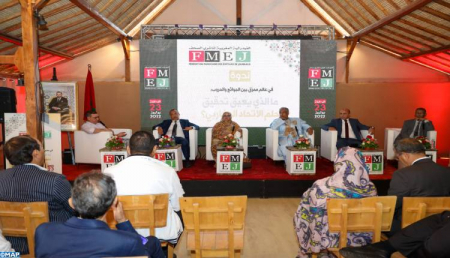 Journalists, political scientists and intellectuals called, Saturday in Dakhla, for an integrated and united Maghreban socio-economic space and stronger ties among the region’s peoples. Participants in a Maghrebian symposium, organized by the Moroccan Federation of Newspaper Publishers (FMEJ) under the theme “In a world torn between pandemics and wars: What hinders the dream of the Maghreb Union?” called to work tirelessly to promote rapprochement, rejecting the discourse of division and stop stirring artificial hostilities. During this event held on the sidelines of the Extraordinary General Assembly of the FMEJ regional section in Dakhla-Oued Eddahab and the meeting of the Federal Council, participants called for a genuine economic integration between the countries of the Maghreb, describing the union as the ideal solution to face the social, economic and political challenges and prospect a better future. They also stressed that the Maghreb countries can no longer bear further fragmentation, highlighting the deep ties uniting the peoples of the region and the dream of Maghreb unity embraced by future generations. In a statement to M24, MAP’s 24-hour news TV channel, FMEJ President Noureddine Miftah stressed the importance of the symposium which brought together a host of journalists, academics and elected officials. This symposium aims to focus on the situation in the Maghreb countries against the backdrop of Algeria’s stubbornness and its obstacles to the realization of the Maghreb dream, he said, adding that the participants were unanimous in pointing out that the Algerian regime and no longer the Algerian people, is still trying to hinder the Maghreb integration. Speaking on this occasion, the president of the region Dakhla-Oued Eddahab, El Khattat Yanja stressed the relevance of the theme of this conference as it examines the unity of the Maghreb, noting that Algeria, which is a party in the Sahara dispute, hinders the process of Maghreb development. Mr. Yanja also focused on means to revive the Greater Arab Maghreb and overcome the obstacles that hamper this union, through strong Maghreban economic dynamics based on a win-win partnership. The southern provinces are a hub for the establishment of this Maghreb economic integration, through the implementation of structuring mega-projects, carried by the new development model of the southern provinces, he added. For his part, UK-based writer and journalist Adil El Hamidi noted that the Greater Maghreb is a dream that haunts generations in the region. The Maghreb countries are bound by ties of history, culture, religion and geography and driven by a strong desire to build an exemplary partnership preserving the interests of countries and peoples, the Tunisian journalist said. The great challenge for the Maghreb region is democracy and political pluralism, he argued, stressing that Morocco has succeeded in its democratic model with the adoption of the Constitution of 2011, alongside Mauritania, which has taken an important step in meeting the expectations of civil forces. He also emphasized the hand extended by the Kingdom, under the enlightened leadership of HM King Mohammed VI, to establish good neighborliness. Mauritanian MP Zainab Mint Ettaqi stressed that the unity of the Greater Maghreb is now essential given the new global changes and the impact of the pandemic on the economy of countries. It is necessary to create synergy between the economies of the Maghreb countries in a balanced and complementary, she said. Faced with this difficult health and economic context, the revival of the Maghreb Union is of crucial importance, Mint Ettaqi noted, stressing that unity depends on the firm political will and the effective involvement of elites, and intellectuals and parliamentarians of the countries concerned. The MP also focused on the obstacles that still hinder the achievement of the dream of the Maghreb Union, including the dispute over the Moroccan Sahara, stressing the relevance of the autonomy plan as a realistic and credible solution to end this artificial conflict. Moderated by journalist Abderrahmane Adaoui, this symposium saw several interventions of writers, political scientists, renowned journalists, officials and intellectuals, including former Mauritanian Minister of Communication, Mohamed Ould Amin and Moussaoui Ajlaoui, an expert at the Center for African and Middle East Studies.