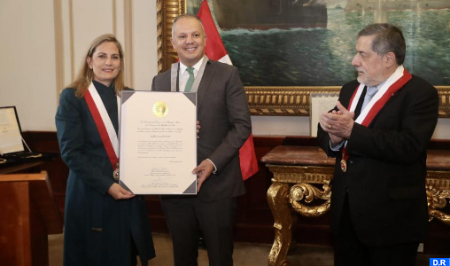 The Peruvian Congress has awarded a decoration to Morocco’s ambassador in Lima, Amin Chaoudri, in recognition of his efforts to strengthen relations between Peru and Morocco. Mr. Amin Chaoudri was presented with the “Medal of Honor of the Congress of the Republic” of the rank of Grand Officer by the President of the Congress, Mrs. Maria del Carmen Alva Prieto, during a ceremony held Thursday in Lima. In its resolution, the Peruvian Congress states that the medal is awarded to Mr. Chaoudri as a sign of recognition for his “exemplary work in seeking academic and cultural integration, strengthening trade relations between Peru and the Kingdom of Morocco, and for his contribution in the field of interfaith dialogue and decentralized cooperation.” While presenting the Moroccan diplomat with the medal, Mrs. Maria del Carmen Alva emphasized that “this decoration is a recognition of the distinguished action and serious commitment” that Mr. Chaoudri has shown in strengthening bilateral relations and the ties of solid friendship between the two countries, especially between their respective legislative institutions.” For his part, Mr. Chaoudri said that this decoration is an honor, but also a pledge of “responsibility to continue working (…) with all institutions of the Peruvian state and with all public and private actors in favor of our brotherly peoples, to consolidate and further develop our bilateral relations.”