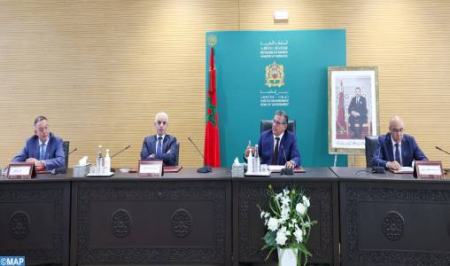 The framework agreement for the implementation of the program to increase the number of health professionals by 2030, signed Monday in Rabat, aims to overcome the lack of medical staff, said Head of Government Aziz Akhannouch. In a statement to the press after the signing ceremony of the framework agreement, the Head of Government said that this program is a priority for the resolution of the problem of lack of medical human resources, the achievement of standards of the World Health Organization (WHO) in terms of number of doctors for every 10,000 inhabitants by 2030, and the achievement of sustainable development goals (SDGs) by 2030, noting that this agreement is part of the draft framework law on the national health system adopted on July 13, during the Council of Ministers chaired by His Majesty King Mohammed VI. This agreement, worth more than 3 billion dirhams, “aims to increase the number of students in the faculties of medicine and pharmacy, to create 3 faculties of medicine and pharmacy and 3 university hospitals in the cities of Errachidia, Beni Mellal and Guelmim, as well as the recruitment of nearly 4,000 new supervisors by 2030,” said the Head of Government. For his part, Minister of Health and Social Protection, Khalid Ait Taleb noted that the signing of this agreement is part of the deployment of the first measures to implement the reform of the national health system. This provides for the implementation of the second provision of the reform of the health system, on strengthening the training of medical human resources, said Ait Taleb, noting that Morocco has a real lack of medical staff (32,000 doctors and 65,000 nurses), which requires urgent measures to “achieve the standards of the World Health Organization set at 25 doctors for every 10,000 inhabitants”. Minister of Higher Education, Scientific Research and Innovation, Abdellatif Miraoui, stressed that this framework agreement “reflects a comprehensive vision to ensure the stability of the Moroccan doctor in his country,” highlighting the centrality of human capital in the implementation of the large-scale project of social protection.