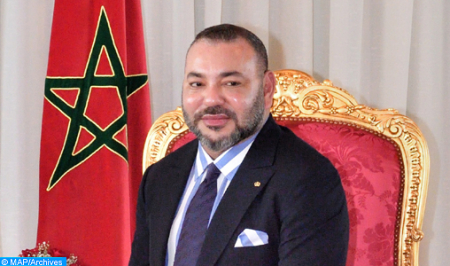 The Royal Cabinet has received a message of loyalty and fidelity addressed to His Majesty King Mohammed VI by House of Representatives Speaker Rachid Talbi Alami, on the occasion of the closure of the second session of the first legislative year of the eleventh legislature. In this message, Talbi Alami expresses, on his behalf and that of all members of the House of Representatives, his sincere and deep feelings of loyalty to His Majesty the King, imploring the Most High to grant the Sovereign health, welfare and tranquility. Talbi Alami seized this opportunity, coinciding with the celebration by the Kingdom of the glorious Throne Day, which marks this year the 23rd anniversary of the accession of His Majesty King Mohammed VI to the throne of His glorious ancestors, to reiterate the firm determination to work within the framework of the prosperous path that the Sovereign has traced for His country and His people in all areas and at all levels, including that of consolidating the institutional edifice and strengthening the modern democratic process. In accordance with the provisions of the Constitution, he stressed, the House of Representatives has worked, under its Rules of Procedure, at a regular and continuous frequency, during this session, to carry out its constitutional and institutional, political, control and especially evaluation missions which has experienced a remarkable momentum during this session, in addition to the prerogatives of legislation and diplomacy which always remain priority areas. The balance sheet of this session confirms the collective will of all components of the institution to strengthen the work of control in its various dimensions and that of evaluation of public policies in a context of interaction with the expectations of society and embodying new dynamics of institutional action, he added. Talbi Alami said that during this session, the House has had a clear and tangible legislative contribution in terms of bills and proposals, with the unanimous approval of 95% of these texts, which illustrates the spirit of patriotism and consensus among the components of the House of Representatives. This spirit is also embodied in the dynamism of the parliamentary diplomatic action in parallel with the official and popular diplomacy, through the participation in several international, continental and regional congresses, on current world issues, in addition to bilateral meetings, that the House has not ceased to hold with the parliaments of brotherly and friendly countries, where the concern for the defense of the supreme interests of the Kingdom and its causes has been omnipresent, at their head the issue of territorial integrity, while keeping in mind the High Royal Directions which “always guide our choices, decisions, initiatives and commitments”, he concluded.