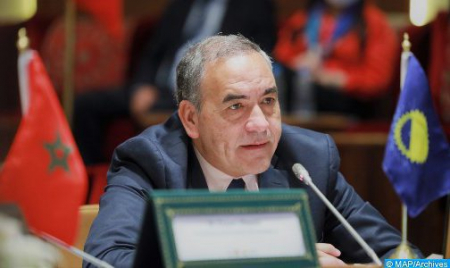 Andean Parliament members’ visit to Morocco has allowed to see firsthand the progress made in different regions of the Kingdom, said the parliament’s Speaker Fidel Espinoza Sandoval, highlighting the willingness of HM King Mohammed VI to promote the material and human capital of the Kingdom. During a meeting Wednesday in Bogotá with members of the Moroccan parliamentary delegation taking part in the General Assembly of the Andean Parliament, Espinoza Sandoval said that this visit has enabled members of the Andean Parliament to learn about the climate of stability enjoyed by the Kingdom and development projects launched in different regions, focusing in particular on socio-economic projects in Laayoune, said a statement from the House of Advisors. These various projects and the development of the southern provinces are a model of inspiration for the countries of the South in general and the countries of the Andean Community in particular, he said. In this regard, he recalled the important recommendations of the first “Morocco-Andean Community” parliamentary economic forum, including those relating to the enormous opportunities for trade between the Andean countries and the Kingdom, given that Morocco is a gateway to the African continent and a credible partner to establish an exemplary South-South cooperation. Regarding the Sahara issue, the president of the Andean Parliament stressed that its positions supporting the territorial integrity of the Kingdom are not explained solely by its links with Morocco, but rather are based on firm convictions and field visits to the southern provinces, during which he inquired about the reality of the situation and the political and historical context of this artificial dispute. He recalled, in this sense, that the city of Laayoune hosted the regular session of the Andean Parliament, the first of its kind held outside Latin America, in harmony with the decision taken by this regional parliamentary body in May 2018 to support the Moroccan Autonomy Plan in the southern provinces, under Moroccan sovereignty and in the context of respect for the territorial integrity of the Kingdom.