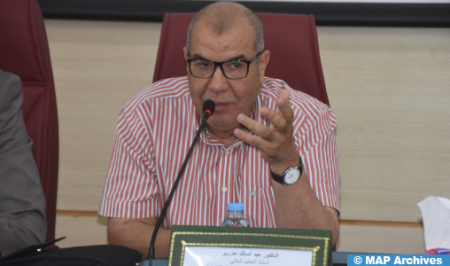 HM King Mohammed VI’s speech to the Nation on the occasion of the 69th anniversary of the Revolution of the King and the People underlines the “decisive and primordial” role of Moroccans living abroad (MRE) in the development and outreach of Morocco, said political scientist Abdelmalek Ihazrir. “The Moroccans of the world are qualified as ambassadors and actors of development,” the political science professor at the Moulay Ismail University of Meknes told MAP. The Sovereign has highly commended the efforts made by the Moroccans living abroad, particularly in terms of defending the national cause, he observed. HM the King called on the government to listen to the members of this community to meet their expectations and accompany them in their projects and investments, he said. The Sovereign urged the Executive to preserve and strengthen the ties between the Moroccan community abroad and the motherland, including Moroccan Jews, Ihazrir added. The scholar pleaded for “the implementation of a public policy to value the efforts and contribution of the Moroccans abroad in the dynamics of development in the Kingdom,” in line with the philosophy of the New Development Model (NMD) as a process of assessing progress. For Mr. Ihazrir, the spirit of the Royal Speech ensures this continuum by recalling the importance of the contribution and participation of this community in strengthening the brand image of Morocco and in becoming potential actors in strengthening the national political and socio-economic structures. HM the King, the expert added, invited the government to prepare, in line with the enlightened vision of the Sovereign, an economic and political elite that can assimilate the needs of this community and recognize its role in building a solid, democratic and prosperous Morocco.