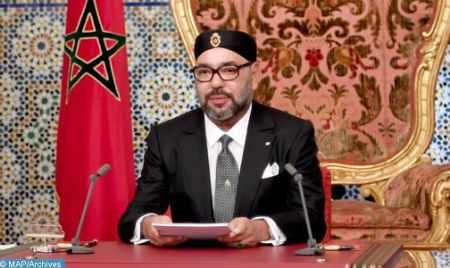 HM King Mohammed VI reviewed the numerous and irreversible gains made regarding the Moroccan Sahara issue and invited Morocco’s still undecided partners to abandon their ambiguous positions and end ambivalence on a crucial issue for Morocco. In the speech delivered this Saturday on the occasion of the 69th anniversary of the Revolution of the King and the People, the Sovereign’s words were crystal clear. With a high sense of synthesis and clarity, HM the King summed up the last two years of favorable achievements in the Sahara issue thanks to the power of persuasion of the royal diplomacy, and the seriousness and credibility of the Moroccan autonomy initiative in the southern provinces. The “just and legitimate” stance of the Kingdom on this issue has been the main drive of the “major accomplishments” achieved by Moroccan diplomacy at the regional and international levels. These accomplishments have resulted in the support expressed by many influential countries for the full sovereignty of Morocco over its Saharan territories. On the list of international support, the geopolitical weight of the United States, Germany, Spain, Holland and Portugal, among others, is clearly in favor of Morocco. This is complemented by the fact that 84% of UN member countries do not recognize the puppet entity set up by Algeria in Tindouf. HM the King emphasized the constancy of the position of the United States of America “that is not affected by a change of Administration, nor is it influenced by new circumstances,” which is a setback for those who have been betting in vain on a change of Administration in Washington. The “clear and responsible” position of Spain, which is well aware of the origins and the reality of the dispute over the Moroccan Sahara, was welcomed by the Sovereign, who noted that the partnership with the northern neighbor is now shielded from the vagaries of politics at the regional level or changes of government at the internal level. Also, the “constructive positioning” regarding the Autonomy Initiative adopted by a number of European countries has strengthened trust-based relations and helped consolidate the qualitative partnership with these friendly countries. Some thirty African, Arab, and Latin American countries have given unequivocal, frank and clear support to the Moroccanness of the Sahara by opening consulates in the southern provinces, which in diplomatic language translates into an irrevocable recognition of the sovereignty of the Kingdom over these territories. Building on this very positive record and on the justness of the national cause, HM the King sent a clear message to the rest of the world and emphasized the centrality of the Sahara issue in Morocco’s relations with its international environment. It is the clear, simple benchmark whereby Morocco “measures the sincerity of friendships and the efficiency of partnerships,” as stated by the Sovereign. Morocco’s partners, traditional as well as new ones, whose stances concerning the Moroccanness of the Sahara are ambiguous are urged by HM the King to clarify their positions and reconsider them in a manner that leaves no room for doubt. To put it plainly, they are invited to leave their comfort zone and put aside the muffled diplomatic language to loyally and honestly express their support for the autonomy initiative. This is also a way of saying that from now on, there is no room for grey in the relations that these countries wish to have with Morocco. All these accomplishments are the result of an unshakable national unity built by Moroccans inside and outside the country, all faiths included. In this respect, HM the King saluted and commend the members of the Moroccan expatriate community, “who spare no effort to defend our territorial integrity on various platforms and in different venues.” The five million Moroccans abroad in addition to the hundreds of thousands of Moroccan Jews around the world constitute a treasure trove of skills that should be preserved and developed through policies of welcome and support that are tailored to their needs and are on par with the love they have for their country. The Sovereign emphasized the high profile of the Moroccan community abroad, which is known for its members’ excellent skills and proficiency in various scientific, economic, political, cultural, sport and other sectors. “This is, indeed, a source of pride for Morocco and all Moroccans,” HM the King said. For the Sovereign, “the time has come to make sure the Moroccan community abroad gets the accompaniment it needs, to create the right conditions and to provide the means for our fellow citizens abroad to give their best and thus contribute to their country’s development.” This approach necessarily requires modernizing and upgrading the institutional framework governing these cherished citizens.