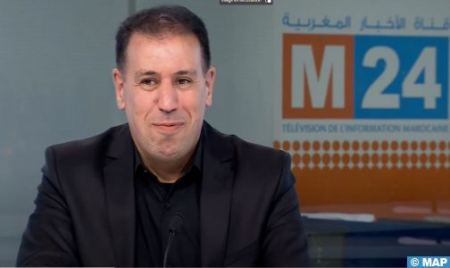 The speech of His Majesty King Mohammed VI on the occasion of the 69th anniversary of the Revolution of the King and the People reaffirms the “new paradigms” adopted by Morocco in its foreign policy, said international relations expert, Lahcen Aqartit. These paradigms are now permanent features of Morocco’s foreign policy and diplomacy, the expert told MAP, noting that the Kingdom will accept nothing less than the recognition of the Moroccanness of the Sahara. “Morocco will accept only clarity and transparency from its allies and friends in this matter,” he added. For Aqartit, the royal speech also stressed that the keystone of political and economic relations between Morocco and the rest of the world is none other than the Sahara issue because it is the lens through which the Kingdom understands its multidimensional relations with countries. The royal speech highlighted Morocco’s accomplishments on the political and diplomatic levels in recent years, namely the establishment of the pre-eminence of the autonomy plan in the southern provinces and the growing recognition of the Moroccan Sahara, he concluded.