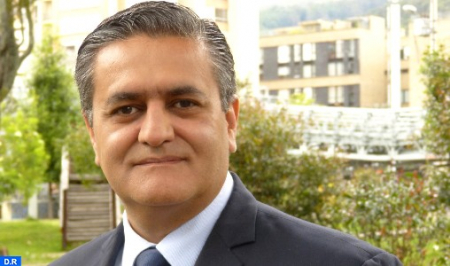 The speech addressed by HM King Mohammed VI on the occasion of the 69th anniversary of the King and People’s Revolution carries a message of firmness and resilience in defending the territorial integrity of Morocco, said Dr. Hernán Olano, rector of the UNICOC University of Colombia. Reacting in a statement to MAP to the royal speech, the Colombian expert listed Morocco gains with several countries around the world, including in Latin America, citing as an example the opening of several consulates in the southern provinces of Morocco. He stressed in this regard that “Peru, which withdrew its recognition of the sadr, will have appreciated the true value of the relationship with Morocco and the links of the latter with all South American countries, all by concluding to the legitimacy of the Moroccan position on the Sahara and its national sovereignty,” he noted. The last speech of HM the King, added Mr. Hernán Olano, also reaffirms the Kingdom’s willingness and efforts to find a solution to the regional conflict over the Moroccan Sahara, within the framework of national unity, the justness of the Moroccan cause and the preservation of regional security and stability. He continued that beyond the South American countries, countries as influential as Spain and the United States have come to decide on this issue to position themselves alongside Morocco and in favor of its territorial integrity, preferring to bring more sincerity in the treatment of this crucial issue for the Kingdom. His Majesty the King has indeed revealed that relations with Morocco should be reconsidered in order to leave the gray area to support the legitimate position of the Kingdom and thus build lasting and unalterable relations, concluded the Colombian academic.