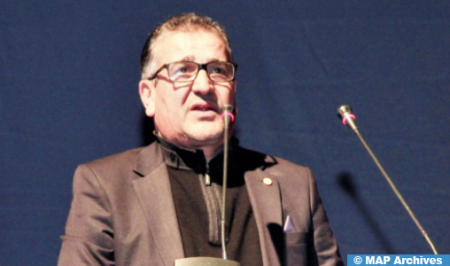 The speech delivered by His Majesty King Mohammed VI on the occasion of the 69th anniversary of the Revolution of the King and the People was clear-cut and frank in setting the rules that should henceforth regulate Morocco’s relations with its partners, said Abdelhamid Jmahri, editor of the daily “Al Ittihad Al Ichtiraki”. The royal speech has highlighted once again the fundamentals of the Kingdom, primarily that the Sahara issue is the lens through which Morocco measures its international environment,” the writer-journalist told MAP. For Jmahri, the royal speech underlined that Morocco’s achievements are “the result of an informed and wise reading of the global changes,” considering that Morocco’s traditional partners must turn the page of ambiguous positions and that “a partner cannot, in this case, claim neutrality on this issue.” Regarding Moroccans living abroad, the columnist pointed out that the royal speech is a clear message aiming at ”doing justice to the Moroccan community living abroad and giving it the place it deserves.” The royal speech, he added, pleaded for “the improvement of the performance of institutions and governance” while encouraging to benefit from the skills and scientific knowledge of the Moroccans of the world. The Moroccan community residing abroad is “an essential lever for the fulfillment of the New Development Model,” the journalist explained. The sovereign called on the relevant institutions to set up a mechanism to support Moroccan experts and talents abroad and to enshrine their bonds with their homeland, while becoming involved in promoting the investments of Moroccan expatriates in their country, Jmahri concluded.