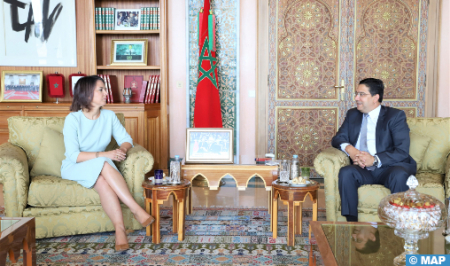 Germany stresses the importance of Morocco as a pole of peace and regional stability, while welcoming the Kingdom’s contribution to regional and international efforts to fight terrorism. In a joint declaration adopted on Thursday after talks in Rabat between the Minister of Foreign Affairs, African Cooperation and Moroccans Abroad, Nasser Bourita, and the German Minister of Foreign Affairs of the Federal Republic of Germany, Annalena Baerbock, currently on a working visit to the Kingdom, the two sides reaffirmed their support for peace, stability and sustainable development of the Euro-Mediterranean region. They also stressed their particular commitment to the fight against international terrorism and transnational organized crime, which is essential for the security and stability of the Euro-Mediterranean region, reads the Joint Declaration. It further stresses that Germany and Morocco will work together in the Mediterranean forums to promote sustainable development, peace, security and stability in this region, including through the Union for the Mediterranean and the Anna Lindh Foundation. Furthermore, Germany welcomed Morocco’s contribution to regional and international efforts to fight terrorism, notably through its co-chairmanship of the Global Counter-Terrorism Forum as well as its co-chairmanship of the Africa Task Force of the Global Coalition against terrorism. Similarly, Morocco welcomed Germany’s active participation in the work of the GCTF (Global Counter-Terrorism Forum) through its co-chairmanship of the Working Group on Capacity Building in West Africa, as well as in the ministerial meeting of the Global Coalition against ISIS, held in Marrakech on May 11, 2022, which devoted an important segment to the examination of the situation in Africa. The Joint Declaration further states that the two ministers reiterated their willingness to continue their cooperation in these various forums.