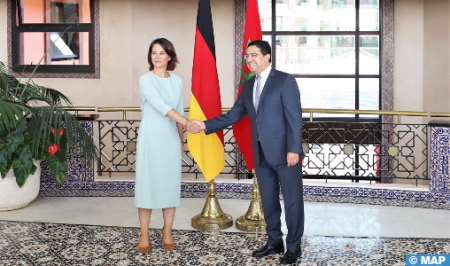 Morocco and Germany have reaffirmed their shared desire to further deepen bilateral relations that have existed between the two countries for many years, with a view to establishing a strengthened partnership looking to the future. This desire was voiced in a Joint Declaration adopted on Thursday after talks in Rabat between the Minister of Foreign Affairs, African Cooperation and Moroccans Abroad, Nasser Bourita, and the German Minister of Foreign Affairs of the Federal Republic of Germany, Annalena Baerbock, currently on a working visit in the Kingdom. This mutual desire is based on the two countries’ willingness to strengthen dialogue, political, economic, cultural and people-to-people relations, to promote democracy, the rule of law and good governance, to develop trade and investment and to cooperate on climate policy, biodiversity policy and green energy solutions. In this partnership, the document adds, civil society and non-governmental organizations, including German political foundations, play an important role. The two ministers, who had fruitful exchanges and stressed the considerable interest of both sides for close and friendly relations, also welcomed the resumption of cooperation between the two countries in all areas and involving all stakeholders, says the same source. In this sense, they declared their willingness to establish a strategic dialogue on bilateral and international issues of common interest, including climate change, development of the African continent, regional peace and stability. They also seek to strengthen the multilateral order, democracy, the rule of law and good governance, management of migration and returns, the fight against terrorism and radicalization, the promotion of human rights and the creation of a Euro-Mediterranean area of common trade and prosperity. On the basis of these objectives, adds the Joint Declaration, the ministers agreed to establish a Multidimensional Strategic Dialogue to be held once every two years, alternately between the Kingdom of Morocco and the Federal Republic of Germany. It further notes that this Dialogue, which will be prepared at the level of Senior Officials, will be chaired by the Ministers of Foreign Affairs of the two countries and may be open to other ministers, if necessary. This Strategic Dialogue will be based on common values and mutual respect in order to establish the principles and foundations of relations between Morocco and Germany, define the basis on which they will be developed and preserve the priority interests of both parties, as well as serve as a basis for moving forward in the framework of bilateral relations and strengthen the coherence between various areas of bilateral cooperation. It will also serve as a platform for discussion and consultation on strategic issues of mutual interest, including regional and international security and development issues, says the document.