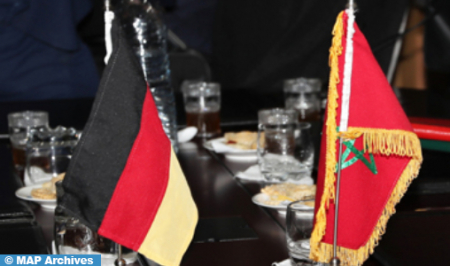 Members of Foreign Affairs, National Defense, Islamic Affairs, and Moroccans Abroad Committee at the House of Representatives and a German Parliamentary Delegation discussed, Thursday in Rabat, ways to strengthen cooperation between Morocco and Germany in various fields. The two parties discussed a range of issues of common interest, including trade and investment consolidation, promotion of cultural cooperation and reinforcement of the role of parliaments in the promotion of bilateral relations. In this regard, the President of the said Commission, Nadia Bouaida, stressed that Morocco and Germany have assets to advance economic relations, promote trade and further strengthen cooperation in various sectors. Highlighting Morocco’s position as the largest investor in West Africa and a bridge to the African region, Ms. Bouaida called for the creation of a tripartite partnership between Morocco, Germany and Africa, and pleaded for a stronger partnership between the two countries to strengthen the foundations of the North-South cooperation. She also called for coordinating on issues of common interest between the two countries on the international scene, intensifying consultation and coordination between the Moroccan and German parliamentary friendship groups and exchanging experiences and views on parliamentary action. For their part, the members of the German delegation expressed their commitment to strengthen cooperation relations between the two countries in the economic, cultural and political fields, address the common challenges facing the two countries, and coordinate on international issues for a more secure and peaceful world. In this sense, they called for promoting joint investments in renewable energy, supporting new partnerships and consolidating cultural relations between countries.