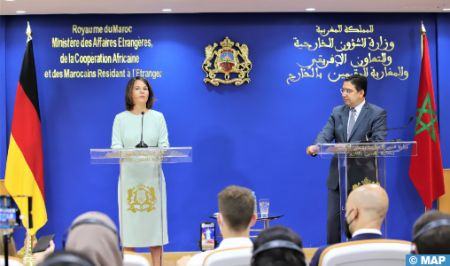 Minister of Foreign Affairs, African Cooperation and Moroccans living abroad, Nasser Bourita, held talks, Thursday in Rabat, with his German counterpart Annalena Baerbock, on a working visit to the Kingdom. During a press conference held after their talks, both ministers reaffirmed their shared willingness to give a new impetus to bilateral relations which have reached a new stage since the message sent last December by the President of the Federal Republic of Germany, Mr. Frank-Walter Steinmeir, to HM King Mohammed VI on the occasion of the New Year. “This visit will undoubtedly give a new impetus to relations between the two countries. It led to a very important joint declaration establishing new mechanisms in our bilateral relations,” Bourita said, explaining that relations between Rabat and Berlin are based on “clarity, mutual respect, trust and work for common interests.” The two sides have discussed several regional issues, praising the position and role of Germany on issues ranging from the Sahel to the Middle East and Ukraine, he added. “We have seen a convergence of views on many issues, whether it is Mali, Libya, or Ukraine. We desire to strengthen consultation on various issues,” Bourita stated. Praising Germany’s role in strengthening relations between Rabat and Brussels, the Moroccan FM stressed that Berlin “has always played a key role in deepening the partnership between Morocco and the European Union in all areas.” According to Mr. Bourita, Germany is a “key country” in the development of a model of relationship between the EU and the southern shore of the Mediterranean based on “mutual benefits and respect” and the creation of “a new type of neighborhood with the EU. For her part, Ms. Baerbock  stated that her talks with Mr. Bourita have resulted in an agreement to strengthen bilateral cooperation through a mechanism of multidimensional strategic political dialogue held every two years at the level of foreign ministries. This meeting, she added, also discussed the strengthening of existing partnerships in the areas of green hydrogen development, the fight against climate change, education and migration. Regarding the Moroccan Sahara issue, the German FM noted that Berlin and the EU support the efforts carried out under the auspices of the United Nations to achieve a political solution, stressing that the autonomy plan presented by Morocco is a “good basis” to resolve this dispute.