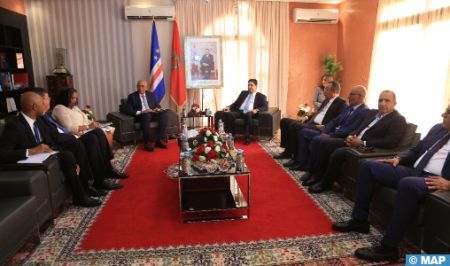 Morocco and the Republic of Cabo Verde signed, Wednesday in Dakhla, a cooperation roadmap, two cooperation agreements and a memorandum of understanding (MoU) aimed at giving new impetus to the multidimensional partnership between the two friendly countries. This roadmap of cooperation was initialed by Minister of Foreign Affairs, African Cooperation and Moroccans abroad, Nasser Bourita and Cape Verdean counterpart Rui Alberto De Figueiredo Soares, on the sidelines of the inauguration ceremony of the Consulate General of the Republic of Cabo Verde in Dakhla. It covers several areas, namely education and training, technical cooperation and security, economic promotion and investment, as well as the exchange of official visits. Under the cooperation roadmap, Morocco assists and shares its expertise with the Republic of Cabo Verde in the areas mentioned above, by organizing learning visits to Morocco for the benefit of senior officials of Cabo Verde and granting scholarships to students and trainees from Cabo Verde in public institutions of higher education and technical and vocational training in Morocco. It also encompasses the provision of capacity-building programs for senior Cabo Verde officials in various fields, sending delegations of Moroccan economic operators to develop win-win business partnerships with local operators and promoting various investment opportunities to carry out joint projects in sectors of priority interest to the Republic of Cabo Verde. As for the agreement on air services, it aims to promote an international transport system to meet the needs of passengers and enable airlines to offer them competitive prices and services in open markets while guaranteeing the highest level of safety and security. The agreement also includes provisions on tariff and tax exemptions. Regarding the agreement on the abolition of visas for holders of diplomatic and service passports, it is part of strengthening relations between the two countries and aims to facilitate the entry, departure and movement between the two states for citizens holding valid diplomatic and service passports to enable them to conduct their missions properly. As for the memorandum of understanding between the Moroccan Academy of Diplomatic Studies (AMED) and the Ministry of Foreign Affairs, Cooperation and Regional Integration of the Republic of Cabo Verde, the two parties are committed to strengthening the partnership and establishing a framework for dynamic and sustainable cooperation in young diplomats’ training and experiences and information exchange in the sector of diplomacy and international relations. With the Inauguration of Cabo Verde’s Consulate in Dakhla, the number of consulates opened in the southern provinces increased to 27 (15 in Dakhla and 12 in Laayoune).