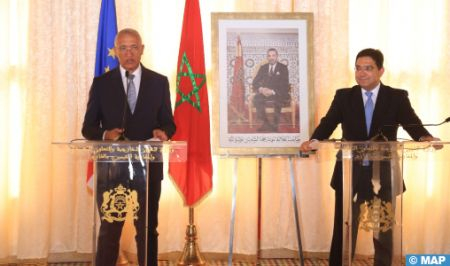 The Minister of Foreign Affairs, African Cooperation and Moroccans Abroad, Nasser Bourita, announced Wednesday in Dakhla, the imminent holding of a ministerial meeting of countries that have opened consulates in the southern provinces of the Kingdom. “We will work in the coming months to hold a meeting, whether in Laayoune or Dakhla, in the presence of all countries that have opened consulates in the southern provinces, to confirm this momentum and create greater coordination between these states,” said Bourita at a joint press briefing with his Cape Verdean counterpart, Rui Alberto De Figueiredo Soares, held at the end of the inauguration in Dakhla of a consulate general of the Republic of Cabo Verde. This initiative, added Bourita, is part strengthening the dynamics of opening consulates, which His Majesty King Mohammed VI has stressed in his speech to the Nation on the occasion of the 69th anniversary of the Revolution of the King and the People, following the positive developments that the issue of the territorial integrity of the Kingdom. The fact that “about 40% of African states have opened consulates in Laayoune and Dakhla,” as stated by HM the King, reflects the general orientation within the African continent to support the territorial integrity of Morocco and its legitimate rights over this part of its territory, he noted. Bourita and the Cape Verdean Minister of Foreign Affairs, Cooperation and Regional Integration, Rui Alberto De Figueiredo Soares, presided Wednesday in Dakhla the opening ceremony of the Consulate General of the Republic of Cabo Verde, which thus marks its firm support for the sovereignty of Morocco over its Sahara and the territorial integrity of the Kingdom.