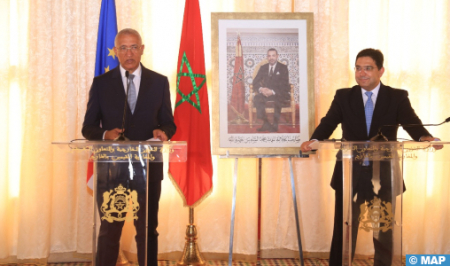 The Cape Verdean Minister of Foreign Affairs, Cooperation and Regional Integration, Rui Alberto De Figueiredo Soares, said that his country, by opening Wednesday a consulate general in Dakhla, confirms its support for the territorial integrity of the Kingdom of Morocco. “The opening of the Consulate General of the Republic of Cabo Verde in Dakhla also expresses support for the Autonomy Plan presented by Morocco and the efforts of the United Nations to find a credible and realistic solution to the resolution of the dispute over the Sahara,” said De Figueiredo Soares during a joint press briefing with the Minister of Foreign Affairs, African Cooperation and Moroccans Abroad, Nasser Bourita, following the inauguration of this diplomatic representation. The head of Cape Verdean diplomacy also noted that the opening of the Consulate General of his country in the Moroccan Sahara expresses the desire to consolidate bilateral relations between the two countries, recalling, in this regard, the joint communiqué signed in Rabat on June 8 on the sidelines of the work of the 1st Ministerial Conference of Atlantic African States. De Figueiredo Soares also emphasized the positive balance of bilateral cooperation and ways to deepen the opportunities between the two countries, including tourism, air and maritime transport, agriculture and fisheries, as well as higher education, training, exchanges of experience and twinning between cities. He has, in this sense, called to further consolidate this cooperation, stressing the need to involve public and private institutions and civil society actors in the realization of these opportunities. In this line, he said that the agreements signed this Wednesday with the Kingdom of Morocco are likely to give new impetus to the multidimensional bilateral partnership, citing in this regard the agreement on air services and that on the abolition of visa for holders of diplomatic passports and services. Similarly, he said that the two countries have “historic relations of friendship and brotherhood,” welcoming the new momentum and the intensification of bilateral political and diplomatic dialogue. The two parties have reached an important and strategic consensus, with the aim of raising bilateral relations to the highest level, he noted, adding that this visit marks an important and strategic step in relations between the two countries, including the inauguration of the Embassy of Cabo Verde in Rabat and its Consulate General in Dakhla. In addition, he recalled having held talks with the Minister of Transport and Logistics, focused on ways to strengthen the partnership in the field of air transport and encourage the Cape Verdean private sector to explore the opportunity of a maritime link between the two countries. “I also visited the Tangier Med port, a strategic project to serve Morocco, Africa and the world,” he continued, expressing the desire to explore cooperation in this area. The number of consulates opened in the southern provinces has been increased to 27 (15 in Dakhla and 12 in Laayoune). Recall that the Republic of Cabo Verde opened Tuesday its embassy in Rabat, during a ceremony chaired by Mr. Rui Alberto De Figueiredo Soares and Nasser Bourita. The inauguration ceremony of the Consulate General of the Republic of Cabo Verde took place in the presence of the Ambassador Director General of the Moroccan Agency for International Cooperation (AMCI), Mohamed Methqal and the President of the region, El Khattat Yanja, as well as consuls accredited to Dakhla and local officials and elected representatives.